An Interview with Harry Dublinsky: The Deal Has To Be Good For Both Sides 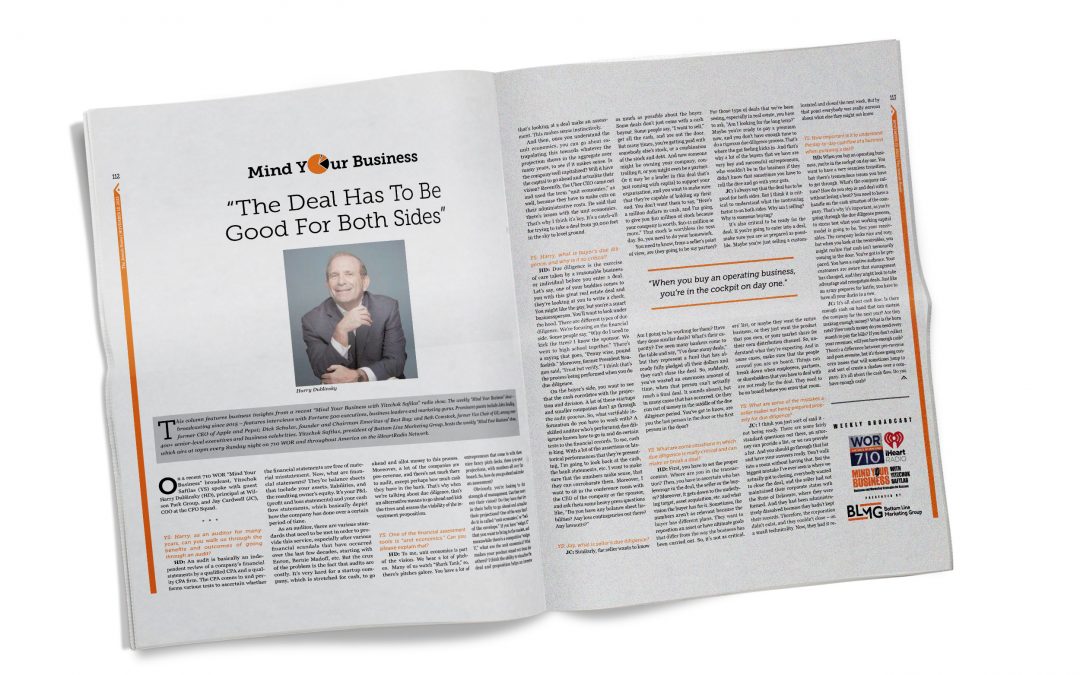 YS: Harry, as an auditor for many years, can walk us trough the benefits and outcomes of going through an audit?

Harry Dublinsky:  An audit is basically an independent review of a company’s financial statements by a qualified CPA and quality CPA firm. The CPA comes in and performs various tests to ascertain whether the financial statements are free of material misstatement. Now, what are financial statements? They’re balance sheets that include your assets, liabilities, and the resulting owner’s equity. It’s your P&L (profit and loss statements) and your cash flow statements, which basically depict how the company has done over a certain period of time.

As an auditor, there are various standards that need to be met in order to provide this service, especially after various financial scandals that have occurred over the last few decades, starting with Enron, Bernie Madoff, etc. But the crux of the problem is the fact that audits are costly. It’s very hard for a startup company, which is stretched for cash, to go ahead and allot money to this process. Moreover, a lot of the companies are pre-revenue, and there’s not much there to audit, except perhaps how much cash they have in the bank. That’s why when we’re talking about due diligence, that’s an alternative means to go ahead and kick the tires and assess the viability of the investment proposition.

YS: One of the financial assessment tools is “unit economics.” Can you please explain that?

Harry Dublinsky:  To me, unit economics is part of the vision. We hear a lot of pitches. Many of us watch “Shark Tank, “so, there’s pitches galore. You have a lot of entrepreneurs that come in with these nice fancy pitch decks, these 5-10-year projections, with numbers all over the board. So, how do you go ahead and make an assessment?

Obviously, you’re looking to the strength of management. Can they carry in their belly to go ahead and actualize their projections? One of the ways that I do it is called “unit economics,” or “back of the envelope.” If you have “widget X” that you want to bring to the market, and meanwhile there’s a competitive “widget Y,” what are the unit economics? What makes your product stand out from the others? I think the ability to visualize the deal and proposition helps an investor that’s looking at a deal make an assessment. This makes sense instinctively. And then, once you understand the unit economics, you can go about extrapolating this towards whatever the projection shows in the aggregate over many years, to see if it makes sense. Is the company well capitalized? Will it have the capital to go ahead and actualize their vision? Recently, the Uber CEO came out and used the term “unit economics,” as well, because they have to make cuts on their administrative costs. He said that there’s issues with the unit economics.  That’s why I think it’s key. It’s a catch-all for trying to take a deal from 30,000 feet in the sky to level ground.

YS: Harry, what is buyer’s due diligence, and why is it so critical?

Harry Dublinsky:   Due diligence is the exercise of care taken by a reasonable business or individual before you enter a deal. Let’s say, one of your buddies comes to you with this great real estate deal and they’re looking at you to write a check. You might like the guy, but you’re a smart businessperson. You’ll want to look under the hood.  There are different types of due diligence. We’re focusing on the financial side. Some people say, “Why do I need to kick the tires? I know the sponsor. We went to high school together.” There’s a saying that goes, “Penny wise, pound foolish.” Moreover, former President Reagan said. ‘Trust but verify.’” I think that’s the process being performed when you do due diligence.

On the buyer’s side, you want to see that the cash correlates with the projection and division. A lot of these startups and smaller companies don’t go through the audit process. So, what verifiable information do you have to work with? A skilled auditor who’s performing due diligence knows how to go in and do certain tests to financial records. To me, cash is king. With a lot of the assertions or historical performances that they’re presenting, I’m going to look back at the cash, the bank statements, etc. I want to make sure that the numbers make sense, that they can corroborate them. Moreover, I want to sit in the conference room with the CEO of the company or the sponsor, and ask them some heavy press questions like, “Do you have any balance sheet liabilities? Any loss contingencies out there? Any lawsuits?”

YS: Jay, what is seller’s due diligence?

Jay Cardwell: Similarly, the seller wants to know as much as possible about the buyer. Some deals don’t just come with a cash buyout. Some people say, “I want to sell,” get all the cash, and are out the door. But many times, you’re getting paid with somebody else’s stock, or a combination of the stock and debt. And now someone might be owning your company, controlling it, or you might even be a partner. Or it may be a lender in this deal that’s just coming with capital to support your organization, and you want to make sure that they’re capable of holding up their end. You don’t want them to say, “Here’s a million dollars in cash, and I’m going to give you $10 million of stock because your company is worth, $10-11 million or more.” That stock is worthless the next day. So, you need to do your homework.

You need to know, from a seller’s point of view, are they going to be my partner? Am I going to be working for them? Have they done similar deals? What’s their capacity? I’ve seen many bankers come to the table and say, “I’ve done many deals,” but they represent a fund that has already fully pledged all their dollars and they can’t close the deal. So, suddenly, you’ve wasted an enormous amount of time, when that person can’t actually reach a financial deal. It sounds absurd, but in many cases that has occurred.  Or they run out of money in the middle of the due diligence period. You’ve got to know, are the last person in the door or the first person in the door?

YS: What are some situations in which due diligence is really critical and can make or break a deal?
Harry Dublinsky:  First, you have to set the proper context. Where are you in the transaction? Then you have to ascertain who has leverage in the deal, the seller or the buyer? Moreover, it gets down to the underlying target, asset acquisition, etc. and what vision the buyer has for it. Sometimes, the numbers aren’t as relevant because the buyer has different plans. They want to reposition an asset or have ultimate goals that differ from the way business has been carried out. So, it’s not as critical.  For those type of deals that we’ve been seeing, especially in real estate, you have to ask, “Am I looking for the long term?” Maybe you’re ready to pay a premium now, and you don’t have enough time to where the gut feeling kicks in. And that’s why a lot of the buyers that we have are very key and successful entrepreneurs, who wouldn’t be in the business if they didn’t know that sometimes you have to roll the dice and go with your guts.

Jay Cardwell: I always say that the deal has to be good for both sides.  But I think it is critical to understand what the motivating factor is on both sides. Why am I selling? Why is someone buying?

It’s also critical to be ready for the deal. If you’re going to enter into a deal, make sure you are as prepared as possible. Maybe you’re just selling a customers’ list, or maybe they want the entire business, or they just want the product that you own, or your market share for their own distribution channel. So, understand what they’re expecting. And in some cases, make sure that the people around you are on board. Things can break down when employees, partners, or shareholders that you have to deal with are not ready for the deal. They need to be on board before you enter that room.

YS: What are some of the mistakes a seller makes not being prepared properly for due diligence?

Jay Cardwell:  I think you just sort of said it- not being ready. There are some fairly standard questions out there, an attorney can provide a list, or we can provide a list. And you should go through that list and have your answers ready. Don’t walk into a room without having that. But the biggest mistake I’ve ever seen is where we actually got to closing, everybody wanted to close the deal, and the seller had not maintained their corporate status with the State of Delaware, where they were formed. And they had been administratively dissolved because they hadn’t kept their records. Therefore, the corporation didn’t exist, and they couldn’t close- on a small technicality. Now, they had it reinstated and closed the next week. But by that point everybody was really nervous about what else they might not know.

YS: How important is it to understand the day-to-day cash flow of a business when pursuing a deal?

Harry Dublinsky:   When you buy an operating business, you’re in the cockpit on day one. You want to have a very seamless transition, but there’s tremendous issues you have to get through. What’s the company culture? How do you step in and deal with it without losing a beat? You need to have a handle on the cash situation of the company. That’s why it’s important, as you’re going through the due diligence process, to stress test what your working capital model is going to be.  Test your receivables. The company looks nice and rosy, but when you look at the receivables, you might realize that cash isn’t necessarily coming in the door. You’ve got to be prepared. You have a captive audience. Your customers are aware that management ha changed, and they might look to take advantage and renegotiate deals. Just like an army prepares for battle, you have to have all your ducks in a row.

Jay Cardwell:  It’s all about cash flow. Is there enough cash on hand that can sustain a company for the next year? Are they making enough money? What is the burn rate? How much money do you need every month to pay the bills? If you don’t collect your revenues, will you have enough cash? There’s a difference between pre-revenue and post-revenue but it’s those going concern issues that will sometimes jump in and sort of create a shadow over a company. It’ all about the cash flow. Do you have enough cash?