An Interview with Norm Trainor: Build relationships for Life 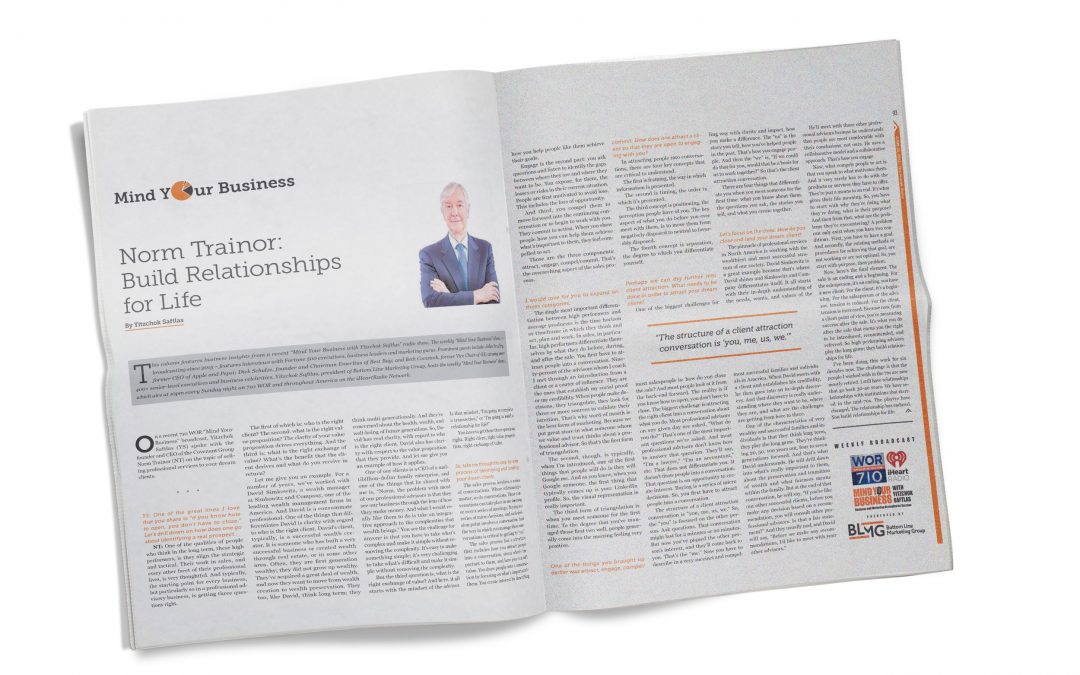 On a recent 710 WOR “Mind Your Business” broadcast, Yitzchok Saftlas (YS) spoke with the founder and CEO of the Covenant Group Norm Trainor (NT) on the topic of selling professional services to your dream clients.

YS: One of the great lines I love that you share is “if you know how to open, you don’t have to close.” Let’s drill down on how does one go about identifying a real prospect.

Norm Trainor: One of the qualities of people who think in the long term, these high performers, is they align the strategic and tactical. Their work in sales, and every other facet of their professional lives, is very thoughtful. And typically, the starting point for every business, but particularly so in a professional advisory business, is getting three questions right.

Let me give you an example. For a number of years, we’ve worked with David Simkowitz, a wealth manager at Simkowitz and Company, one of the leading wealth management firms in America. And David is a consummate professional. One of the things that differentiates David is clarity with regard to who is the right client. David’s client, typically, is a successful wealth creator. It is someone who has built a very successful business or created wealth through real estate, or in some other area. Often, they are first generation wealthy; they did not grow up wealthy. They’ve acquired a great deal of wealth, and now they want to move from wealth creation to wealth preservation. They too, like David, think long term; they think multi generationally. And they’re concerned about the health, wealth, and well-being of future generations. So, Da[1]vid has real clarity, with regard to who is the right client. David also has clarity with respect to the value proposition that they provide. And let me give you an example of how it applies.

One of our clients is a CEO of a multibillion-dollar family enterprise, and one of the things that he shared with me is, “Norm, the problem with most of our professional advisors is that they see our business through the lens of how they make money. And what I would really like them to do is take an integrative approach to the complexities that wealth brings.” You see the challenge for anyone is that you have to take what’s complex and make it simple without removing the complexity. It’s easy to make something simple; it’s very challenging to take what’s difficult and make it simple without removing the complexity.

YS: So, take me through the step-by-step process of identifying and landing your dream clients.

Engage is the second part: you ask questions and listen to identify the gaps between where they are and where they want to be. You expose, for, them the losses or risks in their current situation.  People are first motivated to avoid loss. This includes the loss of opportunity. And third, you compel them to move forward into the continuing con[1]versation or to begin to work with you. They commit to action. When you show people how you can help them achieve what’s important to them, they feel compelled to act.

Those are the three components: attract, engage, compel/commit. That’s the overarching aspect of the sales process.

YS: I would love for you to expand on those categories.

Norm Trainor: The single most important differentiation between high performers and average producers is the time horizon or timeframe in which they think and act, plan and work. In sales, in particular, high performers differentiate the selves by what they do before, during, – tract people into a conversation. Ninety percent of the advisors whom I coach I met through an introduction from a client or a center of influence. They are the ones that establish my social proof or my credibility. When people make decisions, they triangulate, they look for three or more sources to validate their intuition. That’s why word of mouth is the best form of marketing. Because we put great store in what someone whom we value and trust thinks about a proof triangulation.

The second, though, is typically, when I’m introduced, one of the first things that people will do is Google me. And as you know, when you Google someone, the first thing that typically comes up is your LinkedIn profile. So, the visual representation is really important.

The third form of triangulation is when you meet someone for the first time. To the degree you’ve managed those first two well, people generally come into the meeting feeling very positive.

YS: One of the things you brought up earlier was attract, engage, control, compel/commit. How does one attract a client so that they are open to engaging with you?

Norm Trainor: In attracting people into conversations, there are four key concepts that are critical to understand.

The first is framing, the way in which information is presented. The second is timing, the order in which it’s presented. The third concept is positioning, the perception people have of you. The key aspect of what you do before you ever meet with them, is to move them from negatively disposed to neutral to favorably disposed.

The fourth concept is separation, the degree to which you differentiate yourself.

YS: Perhaps we can dig further into client attraction. What needs to be done in order to attract your dream client?

Norm Trainor: One of the biggest challenges for most salespeople is: how do you close the sale? And most people look at it from the back-end forward. The reality is if you know how to open, you don’t have to close. The biggest challenge is attracting the right client into a conversation about what you do. Most professional advisors on any given day are asked, “What do you do?” That’s one of the most important questions we’re asked. And most professional advisors don’t know how to answer that question. They’ll say, “I’m a lawyer,” “I’m an accountant,” etc. That does not differentiate you. It doesn’t draw people into a conversation. The structure of a client attraction conversation is “you, me, us, we.” So, the “you” is focused on the other person. Ask questions. That conversation might last for 2 minutes or 20 minutes. But now you’ve piqued the other person’s interest, and they’ll come back to you. That’s the “me.” Now you have to describe in a very succinct and compelling way with clarity and impact, how you make a difference. The “us” is the story you tell, how you’ve helped people in the past. That’s how you engage people. And then the “we” is, “If we could do that for you, would that be a basis for us to work together?” So that’s the client attraction conversation.

There are four things that differentiate you when you meet someone for the first time:  what you know about them, the questions you ask, the stories you tell, and what you create together.

YS: Let’s focus on the close. How do you close and land your dream client?

Norm Trainor: The pinnacle of professional services in North America is working with the wealthiest and most successful stratum of our society. David Simkowitz is a great example because that’s where David shines and Simkowitz and Company differentiates itself. It all starts with their in-depth understanding of the needs, wants, and values of the most successful families and individuals in America. When David meets with a client and establishes his credibility, he then goes into an in-depth discovery. And that discovery is really understanding where they want to be, where they are, and what are the challenges are getting from here to there.

One of the characteristics of very wealthy and successful families and individuals is that they think long term, they play the long game. They’re thinking 20, 50, 100 years out, four to seven generations forward. And that’s what David understands. He will drill down into what’s really important to them, about the preservation and transition of wealth and what fairness means within the family. But at the end of that conversation, he will say, “If you’re like our other successful clients, before you make any decision based on a recommendation, you will consult other professional advisors. Is that a fair statement?” And they usually nod, and David will say, “Before we make any recommendations, I’d like to meet with your other advisors.”

He’ll meet with those other professional advisors because he understands that people are most comfortable with their conclusions, not ours. He uses a collaborative model and a collaborative approach. That’s how you engage. Now, what compels people to act is that you speak to what motivates them. And it very rarely has to do with the products or service they have to offer. They’re just a means to an end. It’s what gives their life meaning. So, you have to start with why they’re doing what they’re doing, what is their purpose? And then from that, what are the problems they’re encountering? A problem – procedures for achieving that goal, are not working or are not optimal. So, you start with purpose, then problem.

Now, here’s the final element.  The sale is an ending and beginning. For the salesperson, it’s an ending, you have a new client. For the client it is a beginning. For the salesperson or the advisor, tension is reduced. For the client, tension is increased. Because now, from a client point of view, you’re measuring success after the sale. It’s what you do after the sale that earns you the right to be introduced, recommended, and referred. So high performing advisors play the long game; they build relationships for life. I’ve been doing this work for six decades now. The challenge is that the people I worked with in the 70s are now mostly retired. I still have relationships that go back 30-40 years. We have relationships with institutions that started in the mid-70s. The players have changed. The relationship has endured. You build relationships for life.