An Interview with Ron Karr 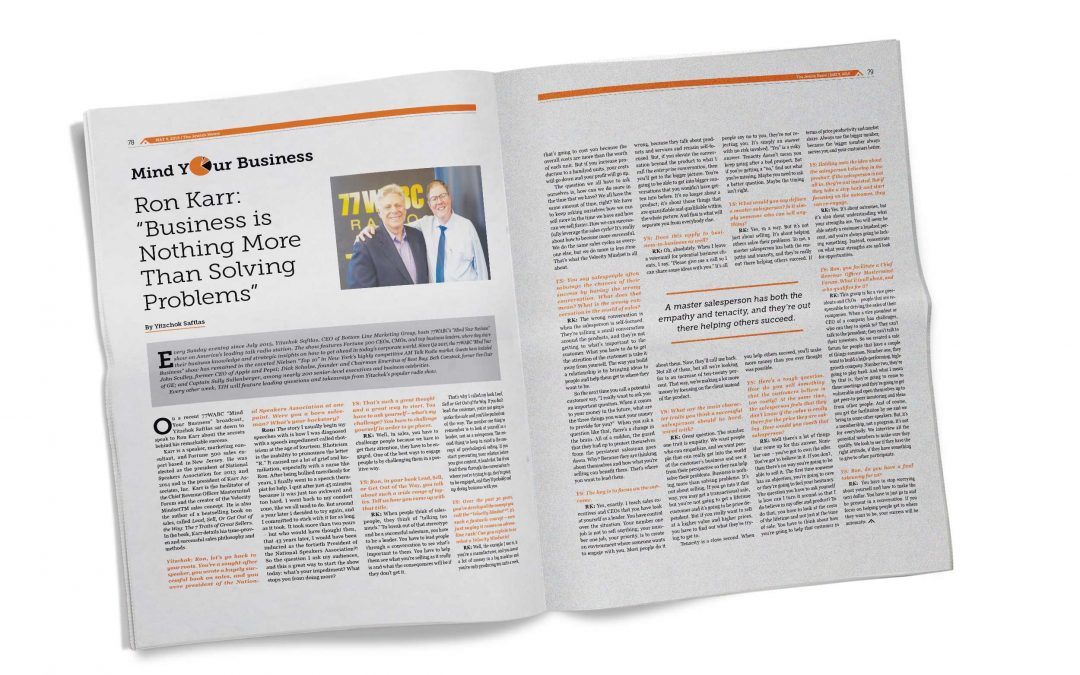 Ron Karr is a speaker, marketing consultant, and Fortune 500 sales expert based in New Jersey. He was elected as the president of National Speakers Association for 2013 and 2014, and is the president of Karr Associates, Inc.  Karr is the facilitator of the Chief Revenue Officer Mastermind Forum and the creator of the Velocity MindsetTMsales concept. He is also the author of a bestselling book on sales, called Lead, Sell, Or Get Out of the Way: The 7 Traits of Great Sellers. In the book, Karr details his time-proven and successful sales philosophy and methods. On a recent 77WABC “Mind Your Business” broadcast, Yitzchok Saftlas sat down to speak to Mr. Karr about the secrets behind his remarkable success.

YS: Ron, let’s go back to your roots. You’re a sought-after speaker, you wrote a hugely successful book on sales, and you were president of the National Speakers Association at one point. Were you a born salesman? What’s your backstory?

RK: The story I usually begin my speeches with is how I was diagnosed with a speech impediment called rhoticism at the age of fourteen. Rhoticism is the inability to pronounce the letter ‘r’. It caused me a lot of grief and humiliation, especially with a name like “Ron”. After being bullied mercilessly for years, I finally went to a speech therapist for help. I quit after just 45 minutes because it was just too awkward and too hard. I went back to my comfort zone, like we all tend to do. But around a year later I decided to try again, and I committed to stick with it for as long as it took. It took more than two years – but who would have thought then, that 43 years later, I would have been inducted as the fortieth President of the National Speakers Association!So the question I ask my audiences, and this a great way to start the show today — what’s your impediment? What stops you from doing more?

YS: That’s such a great thought and a great way to start. You have to ask yourself – what’s my challenge? You have to challenge yourself in order to go places.

RK: Well, in sales, you have to challenge people because we have to get their attention, they have to be engaged. One of the best ways to engage people is by challenging them in a positive way.

YS: Ron, in your book Lead, Sell, or Get Out of the Way, you talk about such a wide range of topics. Tell us how you came up with that title.

RK: When people think of salespeople, they think of ‘talking too much’. To break out of that stereotype and be a successful salesman, you have to be a leader. You have to lead people through a conversation to see what’s important to them. You have to help them see what you’re selling as it really is and what the consequences will be if they don’t get it.

That’s why I called my book Lead, Sell or Get Out of the Way. If you don’t lead the customer, you’re not going to make the sale, and you’ll be pushed out of the way. The number one thing to remember is to look at yourself as a leader, not as a salesperson. The second thing to keep in mind is the concept of psychological selling. If you start presenting your solution before you give context, it lands flat. But if you lead them through the conversation to where you’re trying to go, they’re going to be engaged, and they’ll probably end up doing business with you.

YS: Over the past 30 years, you’ve developed the concept you call the “Velocity MindsetTM”. It’s such a fantastic concept — even just saying it causes an adrenaline rush! Can you explain to us what a Velocity MindsetTM is?

RK: Well, the example I use is — if you’re a manufacturer, and you invest a lot of money in a big machine and you’re only producing ten units a week, that’s going to cost you because the overall costs are more than the worth of each unit. But if you increase production to a hundred units, your costs will go down and your profit will go up. The question we all have to ask ourselves is, how can we do more in the time that we have? We all have the same amount of time, right? We have to keep asking ourselves how we can sell more in the time we have, and how can we sell faster. How we can successfully leverage the sales cycle. It’s really about how to become more successful. We do the same sales cycles as everyone else, but we do more in less time. That’s what the Velocity MindsetTM is all about.

RK: The wrong conversation is when the salesperson is self-focused. They’re talking a small conversation around the products, and they’re not getting to what’s important to the customer. What you have to do to get the attention of the customer is take it away from yourself. The way you build a relationship is by bringing ideas to people and help them get to where they want to be.

So the next time you call a potential customer, say, “I really want to ask you an important question. When it comes to your money in the future, what are the three things you want your money to provide for you?”  When you ask a question like that, there’s a change in the brain. All of a sudden, the guard that they had up to protect themselves from the persistent salesman goes down. Why? Because they are thinking about themselves and how what you’re selling can benefit them. That’s where you want to lead them.

YS: The key is focus on the outcome.

RK: Yes, exactly. I teach sales executives and CEOs that you have look at yourself as a leader. You have control over the situation. Your number one job is not to sell anything, your number one job, your priority, is to create an environment where someone wants to engage with you. Most people do it wrong, because they talk about products and services and remain self-focused. But, if you elevate the conversation beyond the product to what I call the enterprise conversation,then you’ll get to the bigger picture. You’re going to be able to get into bigger conversations that you wouldn’t have gotten into before. It’s no longer about a product; it’s about those things that are quantifiable and qualifiable within the whole picture. And that is what will separate you from everybody else.

YS: Does this apply to Business-to-Business as well?

RK: Oh, absolutely. When I leave a voicemail for potential business clients, I say, “Please give me a call so I can share some ideas with you”. It’s all about them. Now, they’ll call me back. Not all of them, but all we’re looking for is an increase of ten-twenty percent. That way, we’re making a lot more money by focusing on the client instead of the product.

YS: What are the main character traits you think a successful salesperson should be hardwired with?

RK: Great question. The number one trait is empathy. We want people who can empathize, and we want people that can really get into the world of the customer’s business and see it from their perspective so they can help solve their problems. Business is nothing more than solving problems. It’s not about selling. If you go into it that way, you may get a transactional sale, but you’re not going to get a lifetime customer and it’s going to be price dependent. But if you really want to sell at a higher value and higher prices, you have to find out what they’re trying to get to.

Tenacity is a close second. When people say no to you, they’re not rejecting you. It’s simply an answer with no risk involved. ‘Yes’ is a risky answer. Tenacity doesn’t mean you keep going after a bad prospect. But if you’re getting a ‘no’, find out what you’re missing. Maybe you need to ask a better question. Maybe the timing isn’t right.

YS: What would you say defines a master salesperson? Is it simply someone who can sell anything?

RK: Yes, in a way. But it’s not just about selling. It’s about what helping others solve their problems. To me, a master salesperson has both the empathy and tenacity, and they’re really out there helping others succeed. If you help others succeed, you’ll make more money than you ever thought was possible.

YS: Here’s a tough question. How do you sell something that the customers believe is too costly? And at the same time, the salesperson feels that they don’t know if the value is really there for the price they are asking. How would you coach that salesperson?

RK: Well there’s a lot of things that come up for this answer. Number one – you’ve got to own the offer. You’ve got to believe in it. If you don’t, then there’s no way you’re going to be able to sell it. The first time someone has an objection, you’re going to cave or they’re going to feel your hesitancy. The question you have to ask yourself is — how can I turn it around so that I do believe in my offer and product? To do that, you have to look at the costs of the lifetime and not just at the time of sale. You have to think about how you’re going to help that customer in terms of price productivity and market share. Always use the bigger number, because the bigger number always serves you and your customers better.

YS: Holding on to the idea about the salesperson believing in the product— if the salesperson is not all in, they’re not invested. But, if they take a step back and start focusing on the outcomes, they can re-engage.

YS: Ron, you facilitate a Chief Revenue Officer Mastermind Forum. What it is all about, and who qualifies for it?

RK: This group is for a vice presidents and CEOs – people that are responsible for driving the sales of their companies. When a Vice President or CEO of a company has challenges, who can they to speak to? They can’t talk to the President, they can’t talk to their investors. So we created a safe forum for people that have a couple of things common. Number one, they want to build a high-performing, high-growth company. Number two, they’re going to play hard. And what I mean by that is, they’re going to come to these meetings and they’re going to get vulnerable and open themselves up to get peer-to-peer mentoring and ideas from other people. And of course, you get the facilitation by me and we bring in some other speakers. But, it’s a membership, not a program. It’s not for everybody. We interview all the potential members to make sure they qualify. We look to see if they have the right attitude, if they have something to give to other participants.

YS: Ron, do you have a final takeaway for us?

RK:  You have to stop worrying about yourself and how to make the next dollar. You have to just go in and be present in a conversation. If you focus on helping people get to where they want to be, your success will be automatic.