An Interview with Allen and Ben Cohen: Obsessed with Keeping the Customer Happy 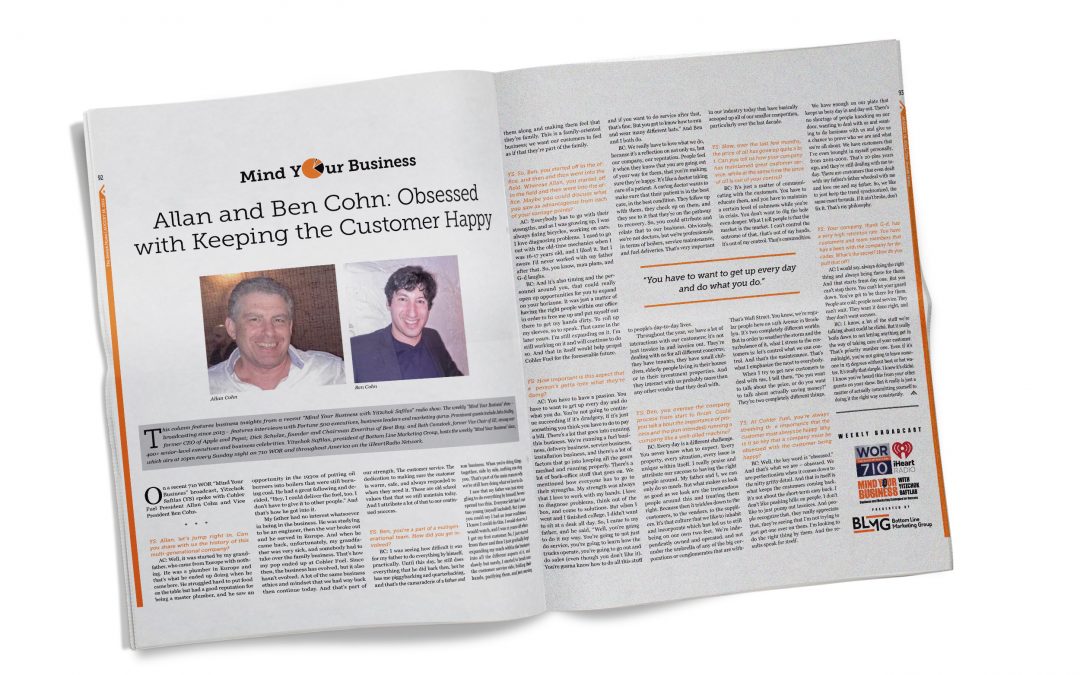 YS: Allan, let’s jump right in. Can you share with us the history of this multi-generational company?

Allan Cohen: Well, it was started by my grandfather, who came from Europe with nothing. He was a plumber in Europe and that’s what he ended up doing when he came here. He struggled hard to put food on the table but had a good reputation for being a master plumber, and he saw an opportunity in the 1930s of putting oil burners into boilers that were still burning coal. He had a great following and decided, “Hey, I could deliver the fuel, too. I don’t have to give it to other people.” And that’s how he got into it.

My father had no interest whatsoever in being in the business. He was studying to be an engineer, then the war broke out and he served in Europe. And when he came back, unfortunately, my grandfather was very sick, and somebody had to take over the family business. That’s how my pop ended up at Cohler Fuel. Since then, the business has evolved, but it also hasn’t evolved. A lot of the same business ethics and mindset that we had way back then continue today. And that’s part of our strength. The customer service. The dedication to making sure the customer is warm, safe, and always responded to when they need it. Those are old school values that that we still maintain today. And I attribute a lot of that to our continued success.

YS: Ben, you’re a part of a multigenerational team. How did you get involved?

Ben Cohn: I was seeing how difficult it was for my father to do everything by himself, practically. Until this day, he still does everything that he did back then, but he has me piggybacking and quarterbacking, and that’s the camaraderie of a father and son business. When you’re doing things together, side by side, nothing can stop you. That’s part of the main reasons why we’re still here doing what we love to do.

I saw that my father was just struggling to do everything by himself, he was spread too thin. Everyone felt that I was too young (myself included). But I guess you could say I had an inner confidence.  I knew I could do this. I would observe, I would watch, and I was 11 years old when I got my first customer. So, I just started from there and then I just gradually kept expanding my reach within the business into all the different aspects of it, and slowly but surely, I started to break into the customer service side, holding their hands, pacifying them, and just nursing them along and making them feel that they’re family. This is a family-oriented business; we want our customers to feel as if that they’re part of the family.

Allan Cohen: Everybody has to go with their strengths, and as I was growing up, I was always fixing bicycles, working on cars. I love diagnosing the problems. I used to go out with the old-time mechanics when I was 16-17 years old, and I liked it. But I swore I’d never work with my father after that. So, you know, man plans, and G-d laughs.

Ben Cohn: And it’s also timing and the personnel around you, that could really open up opportunities for you to expand on your horizons. It was just a matter of having the right people within our office in order to free me up and put myself out there to get my hands dirty. To roll up my sleeves, so to speak. That came in the later years. I ‘m still expanding on it. I’m still working on it and will continue to do so. And that in itself would help propel Cohler Fuel for the foreseeable future.

YS: How important is this aspect that a person’s gotta love what they’re doing?

Allan Cohen: You have to have a passion. You have to want to get up every day and do what you do. You’re not going to continue succeeding if it’s drudgery, if it’s just something you think you have to do to pay a bill. There’s a lot that goes into running this business. We’re running a fuel business, delivery business, service business, installation business, and there’s a lot of factors that go into keeping all the gears meshed and running properly. There’s a lot of back-office stuff that goes on. We mentioned how everyone has to go to their strengths. My strength was always that I love to work with my hands. I love to diagnose problems, think out of the box, and come to solutions. But when I went I finished college I didn’t ant to sit at a desk all day. So, I came to my father, and he said, “Well, you’re going to do it my way. You’re going to not just do service, you’re going to learn how the trucks operate, you’re going to go out and do sales (even though you don’t like it).  You’re gonna know how to do all this stuff to people’s day-to-day lives.

Throughout the year, we have a lot of interactions with our customers; it’s not just invoice in and invoice out. They’re dealing with us for all different concerns; they have tenants, they have small children, elderly people living in their homes or in their investment properties. And they interact with us probably more than any other vendor that they deal with.

YS: Ben, you oversee the company process from start to finish. Could you talk about the importance of process and (no pun intended) running a company like a well-oiled machine?

Ben Cohn: Everyday is a different challenge. You never know what to expect. Every property, every situation, every issue is unique within itself. I really praise and attribute our success to having the right people around. My father and I, we can only do so much. But what makes us look as good as we look are the tremendous people around this and treating them right. Because then it trickles down to the customers, to the vendors, to the suppliers. It’s that culture that we like to inhabit and incorporate which has led us to still being on our own two feet. We’re independently owned and operated, and not under the umbrella of any of the big corporations or conglomerates that are within our industry today that have basically scooped up all of our smaller competition, particularly over the last decade.

YS: Now, over the last few months, the price of oil has gone up quite a bit. Can you tell us how your company has maintained great customer service, while at the same time the price of oil is out of your control?

Ben Cohn: It’s just a matter of communicating with the customers. You have to educate them, and you have to maintain a certain level of calmness while you’re in crisis. You don’t want to dig the hole even deeper. What I tell people is that the market is the market. I can’t control the outcome of that, that’s out of my hands, it’s out of my control. That’s commodities. That’s Wall Street. You know, we’re regular people here on 14th Avenue in Brooklyn. It’s two completely different worlds. But in order to weather the storm and the turbulence of it, what I stress to the customers is: let’s control what we can control. And that’s the maintenance. That’s what I emphasize the most to everybody. When I try to get new customers to deal with me, I tell them, “Do you want to talk about the price, or do you want to talk about actually saving money? They’re two completely different things.

YS: At Cohler Fuel, you’re always stressing the importance that the customer must always be happy. Why is it so key that a company must be obsessed with the customer being happy?

Ben Cohn: Well, the key word is “obsessed.” And that’s what we are – obsessed. We are perfectionists when it comes down to the nitty gritty detail. And that in itself is what keeps the customers coming back. It’s not about the short-term easy buck. I don’t like pushing bills on people. I don’t like to just pump out invoices. And people recognize that, they really appreciate that, they’re seeing that I’m not trying to just get one over on them. I’m looking to do the right thing by them. And the results speak for itself.

We have enough on our plate that keeps us busy day in and day out. There’s no shortage of people knocking on our door, wanting to deal with us and wanting to do business with us and give us a chance to prove who we are and what we’re all about. We have customers that I’ve even brought in myself personally, from 2001-2002. That’s 20-plus years ago, and they’re still dealing with me today. There are customers that even dealt with my father’s father who deal with me and love me and my father. So, we like to just keep the trend synchronized, the same exact formula. If it ain’t broke, don’t fix it. That’s my philosophy.

YS: Your company, thank G-d has a very high retention rate. You have customers and team members that have been with company for decades. What’s the secret? How do you pull that off?

Allan Cohen: I would say, always doing the right thing and always being there for them. And that starts from day one. But you can’t stop there. You can’t let your guard down. You’ve got to be there for them. People are cold; people need service. They can’t wait. They want it done right, and they don’t want excuses.

Ben Cohn: I know, a lot of the stiff we’re talking about could be cliché. But it really boils down to not letting anything get in the way of taking care of your customer. That’s priority number one. Even if it’s midnight, you’re not going to leave someone in 15 degrees without heat or hot water. It’s really that simple. I know it’s cliché. I know you’ve heard this from your other guests on your show. But it really is just a matter of actually committing yourself to doing it the right way consistently.