An Interview with Beth Comstock 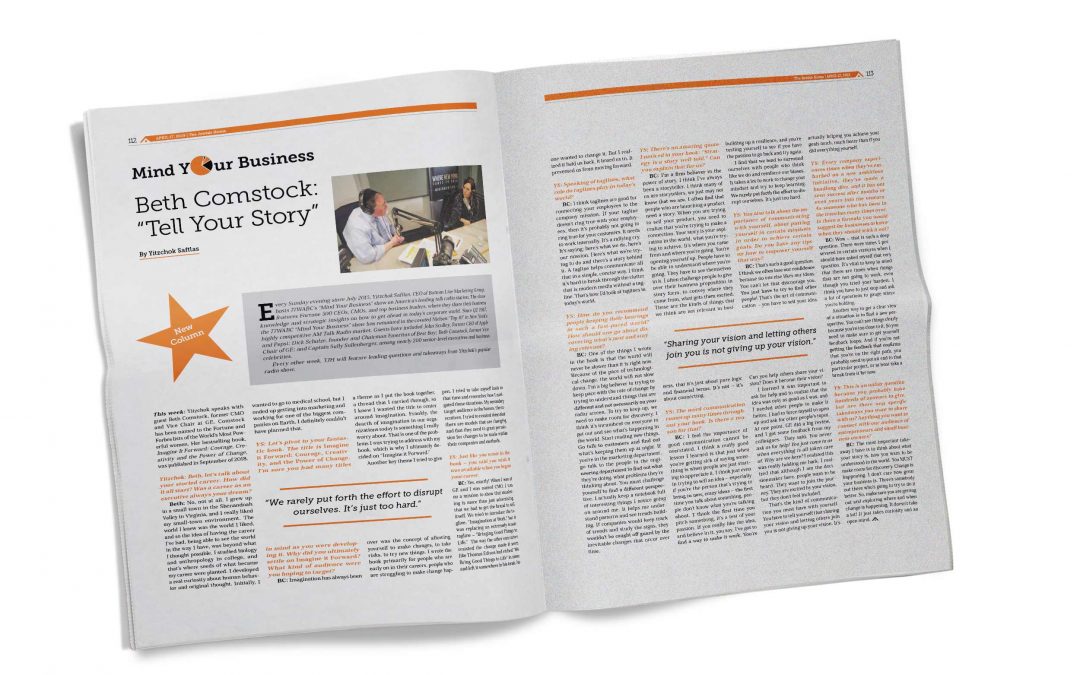 Beth Comstock is a living legend in the world of business and marketing. She is a former vice chair of General Electric and filled the role of CMO at G.E. for more than twenty years. In addition, she has served as President of Integrated Media at NBC Universal, overseeing ad sales, marketing and research. Comstock is also an active member of Nike’s Board of Directors. Incredibly, both Forbes and Fortune have listed her as one of the most powerful women in the world. Her best-selling book, “Imagine It Forward: Courage, Creativity and the Power of Change”, was recently published in September of 2018. On a recent 77WABC Mind Your Business broadcast, Yitzchok Saftlas sat down to speak to Beth about the secrets of her remarkable success.

YS: Beth, let’s talk about your storied career. How did it all start? Was a career as an executive always your dream?

BC: No, not at all. I grew up in a small town in the Shenandoah Valley in Virginia and I really liked my small-town environment. The world I knew was the world I liked, and so the idea of having the career I’ve had, being able to see the world in the way I have, was beyond what I thought possible. I studied biology and anthropology in college, and that’s where seeds of what became my career were planted. I developed a real curiosity about human behavior and original thought. Initially, I wanted to go to medical school, but I ended up getting into marketing and working for one of the biggest companies on earth. I definitely couldn’t have planned that.

YS: Let’s pivot to your fantastic book. The title is “Imagine it Forward: Courage, Creativity, and the Power of Change.” I’m sure you had many titles in mind as you were developing it. Why did you ultimately settle on Imagine it Forward? What kind of audience were you hoping to target?

BC: Yes, I bet we had considered over a hundred different titles before we decided on Imagine it Forward! Imagination has always been a theme as I put the book together, a thread that I carried through, so I knew I wanted the title to center around imagination. Frankly, the dearth of imagination in our organizations today is something I really worry about. That is one of the problems I was trying to address with my book, which is why I ultimately decided on “Imagine it Forward.” Another key theme I tried to give over was the concept of allowing yourself to make changes, to take risks, to try new things. I wrote the book primarily for people that are early on in their careers, people who are struggling to make change happen. I tried to take myself back to that time and remember how I navigated those situations. My secondary target audience is the bosses, the executives. I tried to remind them that there are models that are changing and that they need to grant permission for changes to be made within their companies and methods.

YS: Just like you wrote in the book – You said you wish it was available when you began your career.

BC: Yes, exactly! When I was at G.E. and I was named CMO, I was on a mission to show that marketing is more than just advertising, that we had to get the brand to sell itself. We tried to introduce the tagline, “Imagination at Work”, but it was replacing an extremely iconic tagline – “Bringing Good Things to Life.”  The way the other executives resisted the change made it seem like Thomas Edison had etched “We Bring Good Things to Life” in stone and left it somewhere in his tomb. No one wanted to change it. But I realized it held us back, it boxed us in. It prevented us from moving forward.

YS: Speaking of taglines, what role do taglines play in today’s world?

BC: I think taglines are good for connecting your employees to the company mission. If your tagline doesn’t ring true with your employees, then it’s probably not going to ring true for your customers. It needs to work internally. It’s a rallying cry. It’s saying – here’s what we do, here’s our mission. Here’s what we’re trying to do and there’s a story behind it. A tagline helps communicate all that in a simple, concise way. I think it’s hard to break through the clutter that is modern media without a tagline. That’s how I’d look at taglines in today’s world.

YS: How do you recommend people keeping their bearings in such a fast-paced world? How should one go about discovering what’s next and staying relevant?

BC: One of the things I wrote in the book is that the world will never be slower than it is right now. Because of the pace of technological change, the world will not slow down. I’m a big believer in trying to keep pace with the rate of change by trying to understand things that are different and not necessarily on your radar screen. To try to keep up, we need to make room for discovery. I think it’s incumbent on everyone to get out and see what’s happening in the world. Start reading new things. Go talk to customers and find out what’s keeping them up at night. If you’re in the marketing department, go talk to the people in the engineering department to find out what they’re doing, what problems they’re thinking about. You must challenge yourself to find a different perspective. I actually keep a notebook full of interesting things I notice going on around me. It helps me understand patterns and see trends building. If companies would keep track of trends and study the signs, they wouldn’t be caught off guard by the inevitable changes that occur over time.

YS: There’s an amazing quote I noticed in your book – “Strategy is a story well-told.” Can you explain that for us?

BC: I’m a firm believer in the power of story. I think I’ve always been a storyteller. I think many of us are storytellers – we just may not know that we are. I often find that people who are launching a product need a story. When you are trying to sell your product, you need to realize that you’re trying to make a connection. Your story is your aspiration in the world, what you’re trying to achieve. It’s where you came from and where you’re going. You’re opening yourself up. People have to be able to understand where you’re going. They have to see themselves in it. I often just challenge people to give over their business proposition in story form, to convey where they come from, what gets them excited. These are the kinds of things that we think are not relevant in business, that it’s just about pure logic and financial terms. It’s not – it’s about connecting.

YS: The word communication comes up many times throughout your book. Is there a reason for that?

BC: I feel the importance of good communication cannot be overstated. I think a really good lesson I learned is, that just when you’re getting sick of saying something is when people are just starting to appreciate it. I think just even in trying to sell an idea – especially if you’re the person that’s trying to bring in new, crazy ideas – the first time you talk about something, people don’t know what you’re talking about. I think the first time you pitch something, it’s a test of your passion. If you really like the idea, and believe in it, you say – I’ve got to find a way to make it work. You’re building up a resilience, and you’re testing yourself to see if you have the passion to go back and try again. I find that we tend to surround ourselves with people who think like we do and reinforce our biases. It takes a lot to work to change your mindset and try to keep learning. We rarely put forth the effort to disrupt ourselves. It’s just too hard.

YS: You also talk about the importance of communicating with yourself, about putting yourself in certain mindsets in order to achieve certain goals. Do you have any tips on how to empower yourself that way?

BC: That’s such a good question. I think we often lose our confidence because no one else likes our ideas. You can’t let that discourage you. You just have to try to find other people! That’s the art of communication – you have to sell your idea. Can you help others share your vision? Does it become their vision? I learned it was important to ask for help and to realize that the idea was only as good as I was, and I needed other people to make it better. I had to force myself to open up and ask for other peoples’ input. At one point, G.E. did a big review, and I got some feedback from my colleagues.  They said – you never ask us for help! You just come to us when everything is all taken care of. Why are we here? I realized this was really holding me back. I realized that although I am the decision – maker here, people want to be heard. They want to join the journey. They are excited by your vision, but they don’t feel included. That’s the kind of communication you must have with yourself. You have to tell yourself that sharing your vision and letting others join you is not giving up your vision. It’s actually helping you achieve your goals much, much faster than if you did everything yourself.

YS: Every company experiences times when they’ve embarked on a new ambitious initiative, they’ve made a headlong dive, and it has not seen success after months or even years into the venture. As someone who has been in the trenches many times over, is there a formula you would suggest for businesses to know when they should stick it out?

BC: Wow – that is such a deep question. There were times I persevered in certain ventures when I should have asked myself that very question. It’s vital to keep in mind that there are times that things that are not going to work, even though you tried your hardest. I think you have to just stop and ask a lot of questions to gauge where you’re holding. Another way to get a clear view of a situation is to find a new perspective. You can’t see things clearly, because you’re too close to it. So you need to make sure to get yourself feedback loops. And if you’re not getting the feedback that confirms that you’re on the right path, you probably need to put an end to that particular project, or at least take a break from it for now.

YS: This is an unfair question because you probably have hundreds of answers to give, but are there any specific takeaways you want to share with us? Anything you want to connect with our audience of entrepreneurs and small-business owners?

BC: The most important takeaway I have is to think about what your story is, how you want to be understood in the world. You MUST make room for discovery. Change is happening. I don’t care how great your business is. There’s somebody out there who’s going to try to do it better. So, make sure you are getting out and exploring where and when change is happening. It doesn’t take a lot! It just takes curiosity and an open mind.