An Interview with James Rosebush 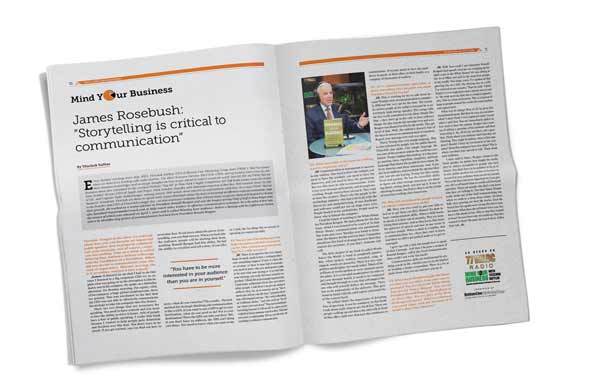 On a recent 77WABC “Mind Your Business” broadcast, Yitzchok sat down to speak with James Rosebush about the keys to becoming an effective corporate communicator. James is the founder and CEO of GrowthStrategy, Inc., an international company that advises many corporate clients with the goal of accelerating their growth. He worked as a senior advisor to President Ronald Reagan and was the longest serving Chief of Staff to Nancy Reagan. James  also launched impactspeakercoach.com to help coach other leaders in effective communication techniques. He is the author of three books, the newest of which was released on April 7, 2020 and is called Winning Your Audience: Deliver a Message with the Confidence of a President where he identifies key points of communication learned from President Ronald Reagan.

Yitzchok: Tonight in the show we will talk about how you can become an impactful public speaker, how to properly communicate your message, and of course, corporate storytelling. Your new book is called Winning Your Audience: Deliver a Message with the Confidence of a President. When did you decide to communicate your lifetime of experience, lifetime serving the U.S. president, and put it into a book?

James: It dawned on me that I had to do this when I listened to a big corporate CEO try to explain what was going on in the disruption in his industry and in his company. He spoke on a Saturday afternoon. On Monday morning the equity value of his company, a huge global conglomerate, dove ten percent. This was attributed to the fact that the CEO was not able to effectively communicate his strategy to take his company into the future. There are two things that are necessary for speaking. You need to have content and you need to have the ability to drive it home. 75% of people have a fear of public speaking. I wrote this book because I wanted to help people gain dominion and freedom over this fear. You don’t have to be afraid. If you get trained, you can find out how to overcome fear. If you learn about the power of storytelling, you can find success. When you look into the audience, people will be shaking their head, nodding. Ronald Reagan had this ability. He had the ability to visualize and tell a story. If you tell a story, what do you visualize? The results.  The best method for strategic thinking and communication is like a GPS. If you want to use a GPS to get to your destination, what do you need to do? Put in your destination! Then the GPS can take you there. But, if you don’t have an address, the GPS can’t bring you there. You need to know what you want to say. As I said, the two things that are necessary for speaking are content and ability.

YS: You are one of the leading experts that help executives craft their corporate narrative. How critical is corporate storytelling? Is it really necessary?

JR: There is no question that every company, large or small, needs to have a contingency plan in case something happens. If there is a dip in sales or revenue, or there is some kind of catastrophe, you need to know who your spokesperson is going to be and what your message is. If you don’t know your message, you really don’t know yourself or your product. I think this is increasingly important today. I had some millennials tell me they can’t relate to other people. I told them I can give one strategy to address that. Go up to someone and say “nice to meet you, tell me your life story” I guarantee the person will respond and say: “Oh, I work in Bloomberg, or Goldman Sachs…” And then you’ll say: “No, tell me where you were born?” This starts something interesting because it will usually be a place you have visited or know someone who lives there. This is how you start a relationship. Tell me your life story. Storytelling is critical to communication.

YS: What are some of the steps to crafting a great corporate story?

JR: Communication is tantamount to success in any venture. You need to have the contact, you need to have the product, you need to have the discovery, and you need to have the production. But you also must be able to communicate. Today it has to be through authenticity and through storytelling. People want to hear you say it. They want to hear the creators. That’s why the people in the technology industry who had a lot to do with the discovery and manufacturing of new hardware and software would get out on stage every year. People flocked to his authenticity. People want to know who is behind the company. I had the honor of working in the White House for President Reagan. We had a theme for the day team, which I was honored to be a part of. In that White House, communication was paramount. And, the team met every Tuesday over lunch to determine the themes for the next ten days. Companies should use this kind of strategy because then they control the narrative. If you don’t someone else will. The first chapter of my book is called Words Power the World. A word is completely passive. But, when spoken, written, recorded, sung, or rapped, words are powerful. There is a very competitive marketplace for words today. Think of the millions of words spoken at every moment across the globe. It is a crowded marketplace! In order to get your message heard, it needs to be composed and thought through in a way that will support the one who will actually deliver the message. There has to be authenticity of the deliverer. This goes hand in hand with the solid nature and creativity of the content itself. We talked about the importance of defeating fear of speaking. It can be combated. In this book, I talk about eight steps to get rid of fear. There are people walking up and down the sidewalk in front of this office right now that lack the confidence to communicate. Everyone needs to have the confidence to speak, in their office, in their family, or a company of thousands of workers.

YS: As a communications specialist, is there something you can point out about President Donald Trump?

JR: This is exciting for me to talk about because Trump’s style of communication is completely different but very apt for the time. The reason he excites people at his rallies is because he is an extremely high energy speaker. The energy tells me he’s really committed to his ideas. People like that – they don’t go to the rally to hear ordinary things. He also repeats his message over and over. Reagan was blamed for this by the media. They get tired of that. Well, the audience doesn’t! One of the keys to success in communication is repetition. Repeat your message over and over again. Third, Trump uses very simple language. This is also criticized by people, but the public likes it. Churchill also spoke with simple language. He was one of the greatest orators the world has ever known. Trump employs this strategy. It is his energy, passion, force, repetition, simplicity, and body language that shows the people he loves them. He loves America and these Americans. And, if you are in an audience and you think the speaker likes you, you are not leaving. Trump has this energy, focus and passion. He has the incredible ability to figure out what average Americans are thinking about, caring about, and just say it. It may be shocking to some, but that is what is on the minds of everyday working class Americans.

YS: Why is it so critical for people to have excellent communication skills?

JR: Have you ever tried to put your kids to bed or to get them eat their dinner? It’s done by basic communication skills.When a child learns to speak it is done out of curiosity. They are mimicking their parents. And as they learn, they learn the patterns of speech and how to use words to convince people. When a child is a toddler, that is communication 101, where they start to learn. And then we either get pushed aside or we get encouraged. I grew up with a dad who taught how to speak in Dale Carnegie. And then I became a student of Ronald Reagan, called the Great Communicator. How could I not write this book? Communication skills are fundamental to anything you do in life, whether you are in the kitchen or heading a major corporation. There is a lot at stake from what you say and how you say it.

JR: Well, how could I not remember Ronald Reagan’s last speech when he was wrapping up his eight years in the White House? He was sitting in the Oval Office and said to the American people, to the world: “For many years, I’ve spoken of that glowing city on a hill, the shining city on a hill. I’ve referred to our country.” Then he says: “I don’t think I’ve ever explained what I meant when I said it.” He goes on to say that this is a land of opportunity. This is a land of freedom. This is a beacon of hope to people around the world who seek freedom and opportunity. What was he doing? First of all, he gives this inspirational quote. But then he says, do you know what? I don’t think I ever explained what I meant when I said that. You are immediately pulled in. You want to hear the answer. Reagan was a master of asking a question of his audience and then answering it. So, all of you out there, ask a question. Think about your audience and what they are thinking. They might be asking where is this company? Should I keep my investment in the company? Does this company have new ideas? This is where you start your speech or talk. Think about your audience. I once said to Nancy Reagan, whenever the heart speaks, no matter how simple the words, they’re always acceptable to people who have hearts. You don’t have to be polished to be an effective public speaker, but you have to be more interested in your audience than you are in yourself. This is the final and most important key I can give you. We’ve all heard what we would call blowhard speeches. These are people who don’t even know who they are talking to. The time Nancy Reagan really broke out of her shell communicating was when we went to a drug abuse center. All these kids were pouring out their life stories. Even the Secret Service agents were crying. She threw away her notes. What does she tell them? I love you. You have a life ahead of you. This is what they wanted to hear! Do you know why she could say what they wanted to hear? Because she heard them. Follow that rule.