An Interview with Jeffrey Hayzlett 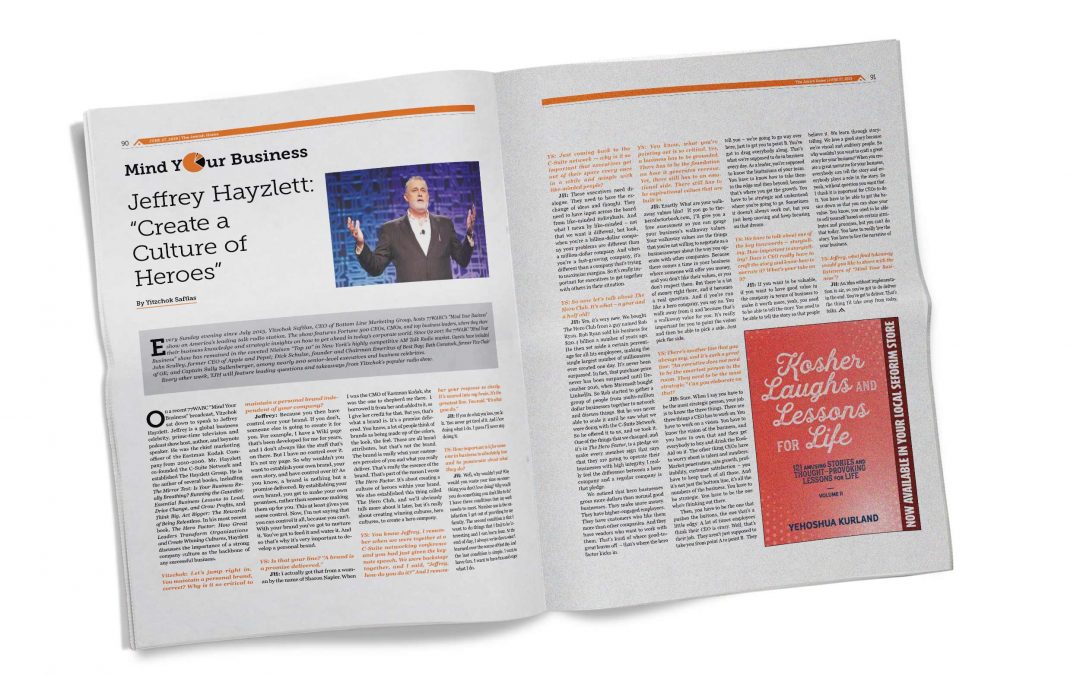 Jeffrey Hayzlett is a global business celebrity, prime-time television and podcast show host, author, and keynote speaker. He was the Chief Marketing Officer of the Eastman Kodak Company from 2006-2010. Mr. Hayzlett co-founded the C-Suite Network, and established The Hayzlett Group. He is the author of several books, includingThe Mirror Test: Is Your Business Really Breathing?, Running the Gauntlet: Essential Business Lessons to Lead, Drive Change, and Grow Profits, and, Think Big, Act Bigger: The Rewards of Being Relentless. In his most recent book, The Hero Factor: How Great Leaders Transform Organizations and Create Winning Cultures, Hayzlett discusses the importance of a strong company culture as the backbone of any successful business. On a recent 77WABC “Mind Your Business” broadcast, Yitzchok Saftlas sat down to speak to Mr. Hayzlett about the secrets behind his remarkable success.

JH: Because you then have control over your brand. If you don’t, someone else is going to create it for you. For example, I have a Wiki page that’s been developed for me for years, and I don’t always like the stuff that’s on there. But I have no control over it. It’s not my page. So why wouldn’t you want to establish your own brand, your own story, and have control over it? As you know, a brand is nothing but a promise delivered. By establishing your own brand, you get to make your own promises, rather than someone making them up for you. This at least gives you some control. Now, I’m not saying that you can control it all, because you can’t. With your brand you’ve got to nurture it. You’ve got to feed it and water it. And so that’s why it’s very important to develop a personal brand.

YS: By the way — is that your line? “A brand is a promised delivered”?

JH: I actually got that from a woman by the name of Sharon Napier. When I was the CMO of Eastman Kodak, she was the one to shepherd me there.  I borrowed it from her, and added to it, so I give her credit for that. But yes, that’s what a brand is. It’s a promise delivered. You know, a lot of people think of brands as being made up of the colors, the look, the feel. Those are all brand attributes, but that’s not the brand. The brand is really what your customers perceive of you and what you really deliver. That’s really the essence of the brand. That’s part of the reason I wrote The Hero Factor. It’s about creating a culture of heroes within your brand.  We also established this thing called The Hero Club, and we’ll obviously talk more about it later, but it’s really about creating winning cultures, hero cultures, to create a hero company.

YS: You know Jeffrey, I remember when we were together at a C-Suite networking conference and you had just given the keynote speech. We were backstage together, and I said “Jeffrey, how do you do it?” And I remember your response so clearly. It’s seared into my brain. It’s the greatest line. You said, “It’s what you do.”

JH: If you do what you love, you do it. You never get tired of it. And I love doing what I do. I guess I’ll never stop doing it.

YS: How important is it for someone in business to absolutely love and be passionate about what they do?

JH:  Well, why wouldn’t you? Why would you waste your time on something you don’t love doing? Why would you do something you don’t like to do? I have three conditions that my work needs to meet. Number one is the satisfaction I get out of providing for my family. The second condition is that I want to do things that I find to be interesting and I can learn from. At the end of day, I always write down what I learned over the course of that day. And the last condition is simple. I want to have fun. I want to have fun and enjoy what I do.

YS: Just coming back to the C-Suite network —Why is it so important that executives get out of their space every once in a while and mingle with like-minded people. Why is that so critical?

These executives need dialogue. They need to have the exchange of ideas and thought. They need to have input across the board from like-minded individuals. And what I mean by like-minded – not that we want it different, but look, when you’re a billion-dollar company your problems are different than a million-dollar company. And when you’re a fast-growing company, it’s different than a company that’s trying to maximize margins. So it’s really important for executives to get together with others in their situation.

YS: So now let’s talk about The Hero Club. It’s what – a year and a half old?

JH: Yes, it’s very new. We bought The Hero Club from a guy named Rob Ryan. Rob Ryan sold his business for 20.4 billion dollars a number of years ago. He then set aside a certain percentage for all his employees, making the single largest number of millionaires ever created one day. It’s never been surpassed. In fact, that purchase price never has been surpassed until December 2016, when Microsoft bought LinkedIn. So Rob started to gather a group of people from multi-million dollar businesses together to network and discuss things. But he was never able to scale it until he saw what we were doing with the C-Suite Network. So he offered it to us, and we took it. One of the things that we changed, and it’s in The Hero Factor, is a pledge we make every member sign that says that they are going to operate their businesses with high integrity. I really feel the difference between a hero company and a regular company is that pledge.

We noticed that hero businesses gross more dollars than normal good businesses. They make more money. They have higher-engaged employees. They have customers who like them more than other companies. And they have vendors who want to work with them. That’s kind of where good-to-great leaves off — that’s where the hero factor kicks in.

YS: You know, what you’re pointing out is so critical. Yes, a business has to be grounded. There has to be the foundation on how it generates revenue. Yet, there still has to an emotional side. There still has to be aspirational values that are built in.

JH: Exactly. What are your walkaway values like?  If you go to theherofactorbook.com, I’ll give you a free assessment so you can gauge your business’s walkaway values. Your walkaway values are the things that you’re not willing to negotiate as a business owner about the way you operate with other companies. Because there comes a time in your business where someone will offer you money, and you don’t like their values, or you don’t respect them. But there is a lot of money right there, and it becomes a real question. And if you’re run like a hero company, you say no. You walk away from it and because that’s a walkaway value for you. It’s really important for you to paint the vision and then be able to pick a side. Just pick the side.

YS: There’s another line that that you always say, and it’s such a great line.  “An executive does not need to be the smartest person in the room. They need to be the most strategic.” Can you elaborate on that?

Then, you have to be the one that pushes the buttons, the one that’s a little edgy. A lot of times employees think their CEO is crazy. Well, that’s their job.  They aren’t just supposed to take you from point A to point B.  They tell you – we’re going to go way over here, just to get you to point B. You’ve got to drag everybody along. That’s what we’re supposed to do in business every day. As a leader, you’re supposed to know the limitations of your team. You have to know how to take them to the edge and then beyond, because that’s where you get the growth. You have to be strategic and understand where you’re going to go. Sometimes it doesn’t always work out, but you just keep moving and keep focusing on that dream.

YS: We have to talk about one of the key buzzwords — storytelling. How important is storytelling? Does a CEO really have to craft the story and know how to narrate it? What’s your take on it?

YS: Jeffrey, what final takeaway would you like to share with the listeners of Mind Your Business?

JH: An idea without implementation is air, so you’ve got to do deliver in the end. You’ve got to deliver. That’s the thing I’d take away from today, folks.