An Interview with Marc Bodner & Lee Brower: Gratitude and Motion 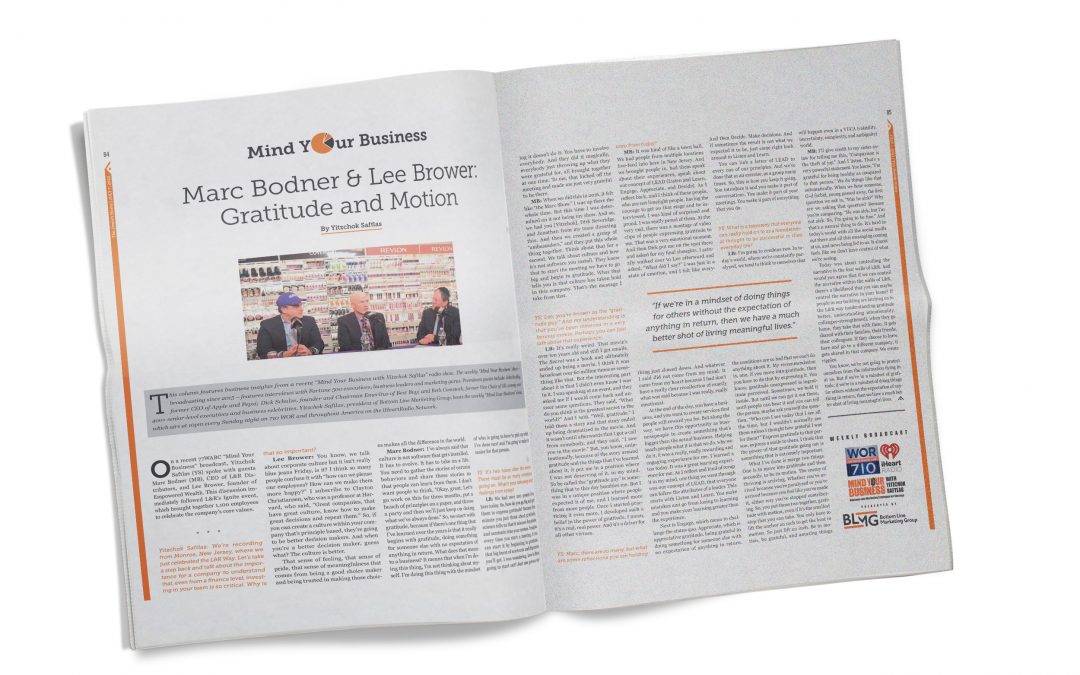 YS: We’re recording from Monroe, New Jersey, where we just celebrated the L & R way. Let’s take a step back and talk about the importance for a company to understand that, even from a finance level, investing in your team is critical. Why is this so important?

Lee Brower: You know, we talk about corporate culture but it isn’t really blue jeans Friday, is it? I think so many people confuse it with “how can we please our employees? How can we make them more happy?” I subscribe to Clayton Christiansen, who was a professor at Harvard, who said, “Great companies, that have great culture, know how to make great decisions and repeat them.” So, if you can create a culture within your company that’s principle based, they’re going to be better decision makers. And when you’re a better decision maker, guess what? The culture is better. That sense of feeling, that sense of pride, that sense of meaningfulness that comes from being a good choice maker and being trusted in making those choices makes all the difference in the world.

Marc Bodner: I’ve always said that culture is not software that gets installed. It has to evolve. It has to take on a life. You need to gather the stories of certain behaviors and share those stories so that people can learn from them. I don’t want people to think, “Okay, great. Let’s go work on this for three months, put a bunch of principles on a paper, and throw a party and then we’ll just keep on doing what we’ve always done.” So, we start with gratitude, because if there’s one thing that I’ve learned over the years is that it really begins with gratitude, doing something for someone else with no expectation of anything in return. What does that mean to a business? It means that when I’m doing this thing, I’m not thinking about myself. I’m doing this thing with the mindset of who is going to have to pick up what I’ve done next and I’m going to make it easier for that person.

YS: It’s two hours after the event. There must be so many emotions going on. What’s your takeaway and feelings from today?

Marc Bodner: When we did this in 2016, it felt like “the Marc Show.” I was up there the whole time. But this time I was determined on it not being my show. And so, we had you [Yitzchok], Dirk Beveridge, and Jonathan from my team directing this. And then we created a group of “ambassadors,” and they put this whole thing together. Think about that for a second. We talk about culture and how it’s not software you install. They knew that to start the meeting we have to go big and begin in gratitude. What that tells you is that culture has taken hold in this company. That’s the message I take from that.

YS: Lee, you’re known as the “gratitude guy” And my understanding is that you’ve been involved in a very famous movie. Perhaps you can just talk about that experience.

Lee Brower: It’s really weird. That movie’s over ten years old and still I get emails. The Secret was a book and ultimately ended up being a movie. I think it was broadcast over 60 million times or something like that. But the interesting part about it is that I didn’t even know I was in it. I was speaking at an event, and they asked me if I would come back and answer some questions. They said, “What do you think is the greatest secret in the world?” And I said, “Well, gratitude.” I told them a story and that story ended up being dramatized in the movie. And it wasn’t until afterwards that I got a call from somebody, and they said, “I saw you in the movie.” But, you know, unintentionally, because of the story around gratitude and the things that I’ve learned about it, it put me in a position where I was not deserving of it, in my mind. To be called the “gratitude guy” is something that to this day humbles me. But I was in a unique position where people expected it of me, and I learned more from more people. Once I started practicing it even more, I developed such a belief in the power of gratitude. I mean, it’s a real, real power. And it’s a driver for all other virtues.

YS: Marc, there are so many, but what are some reflections you are holding onto from today?

Marc Bodner:  It was kind of like a town hall. We had people from multiple locations live-feed into here in New Jersey. And we brought people in, had them speak about their experiences, speak about our concept of LEAD (Listen and Learn, Engage, Appreciate, and Decide). As I reflect back and I think of these people, who are not limelight people, having the courage to get on that stage and be interviewed, I was kind of surprised and proud. I was really proud of them. At the very end, there was a montage of video clips of people expressing gratitude to me. That was a very emotional moment. And then Dirk put me on the spot there and asked for my final thoughts. I actually walked over to Lee afterward and asked, “What did I say?” I was just in a state of emotion, and I felt like everything just slowed down. And whatever I said did not come from my mind. It came from my heart because I had don’t have a really clear recollection of exactly what was said because I was really, really emotional.

At the end of the day, you have a business, and you want to create services that people will reward you for. But along the way, we have this opportunity as businesspeople to create something that’s bigger than the actual business. Helping teach people what it is that we do, why we do it, it was a really, really rewarding and engaging experience for me. I learned a ton today. It was a great learning experience for me. As I reflect and kind of recap it in my mind, one thing we went through was our concept of LEAD, that everyone can follow the attributes of a leader. This starts with Listen and Learn. You make mistakes and go from losing to learning and you make your learning greater than the experience.

Next is Engage, which means to challenge the status quo. Appreciate, which is appreciative gratitude, being grateful in doing something for someone else with no expectation of anything in return. And then Decide. Make decisions. And if sometimes the result is not what we expected it to be, just come right back around to Listen and Learn. You can link a letter of LEAD to every one of our principles. And we’ve done that as an exercise, as a group many times. So, this is how you keep it going. You introduce it and you make it part of conversations. You make it part of your meetings. You make it part of everything that you do.

YS: What is a takeaway that everyone can really hold on to as a foundational thought to be successful in their everyday life?

Lee Brower: I’m going to combine two. In today’s world, where we’re constantly paralyzed, we tend to think to ourselves the conditions are so bad that we can’t do anything about it. My recommendation is, one, if you move into gratitude, then you have to do that by expressing it. You know, gratitude unexpressed is ingratitude perceived. Sometimes, we hold it inside. But until we can get it out there, until people can hear it and you can tell the person, maybe ask yourself the question, “Who can I see today that I see all the time, but I wouldn’t normally see them unless I thought how grateful I was for them?” Express gratitude to that per[1]son, express a smile to them. I think that the power of that gratitude going out is something that is extremely important.

What I’ve done is merge two things. One is to move into gratitude and then secondly, to be in motion. The enemy of thriving is arriving. Whether you’ve arrived because you’re paralyzed or you’ve arrived because you feel like you’ve made it, either way you’ve stopped contributing. So, you put those two together, gratitude with motion, even if it’s the smallest step that you can take. You only have to lift the anchor an inch to get the boat in motion. So just lift an inch. Be in motion, be grateful, and amazing things will happen even in a VUCA (volatility, uncertainty, complexity, and ambiguity) world.

Marc Bodner: I’ll give credit to my sister-in law for telling me this, “Comparison is the theft of joy.” And I listen. That’s a very powerful statement. You know, “I’m grateful for being healthy as compared to that person.” We do things like that automatically. When we hear someone, G-d forbid, young passed away, the first question we ask is, “Was he sick?” Why are we asking that question? Because you’re comparing. “He was sick, but I’m not sick. So, I’m going to be fine.” And that’s a natural thing to do. It’s hard in today’s world with all the social media out there and all this messaging coming at us, and news being fed to us. It almost feels like we don’t have control of what we’re seeing.

Today was about controlling the narrative in the four walls of L&R. And would you agree that if we can control the narrative within the walls of L&R, there’s a likelihood that you can maybe control the narrative in your home? If people in our building are latching on to the L&R way (understanding gratitude better, understanding intentionality, colleague-strengthened), when they go home, they take that with them. It gets shared with their families, their friends, their colleagues. If they choose to leave here and go to a different company. We create ripples.