An Interview with Mark Trencher “Research is Fun” 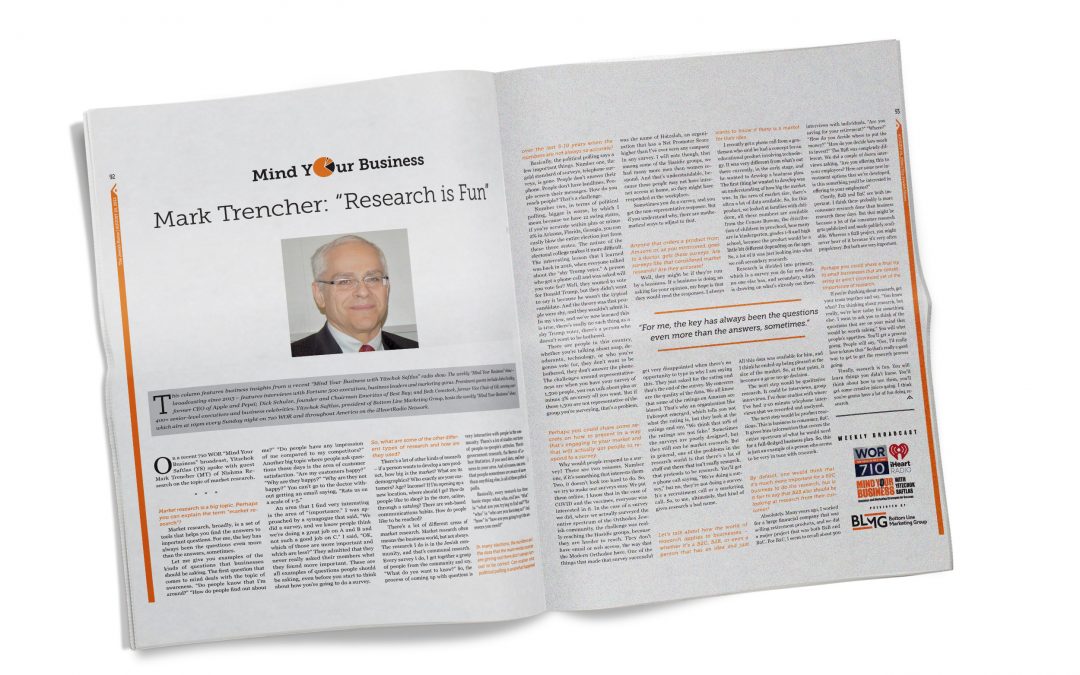 On a recent 710 WOR “Mind Your Business” broadcast, Yitzchok Saftlas (YS) spoke with guest Mark Trencher (MT) of Nishma Research on the topic of market research.

Mark Trencher: Market research, broadly, is a set of tools that helps you find answers to important questions. For me the key has always been the questions even more than the answers, sometimes.

Let me give you examples of the kinds of questions that businesses should be asking. The first question that comes to mind deals with the topic of awareness. “Do people know that I’m around?” “How do people find out about me?”  Do people have any impression of me compared to my competitors?” Another big topic where people ask questions these days is the area of customer satisfaction. “Are my customers happy?” ‘Why are they not happy?” You can’t go to the doctor without getting an email saying, “Rate us on a scale of 1-5.”

An area that I find very interesting is the area of “importance.” I was approached by a synagogue that said, “We did a survey, and we know people think we’re doing a great job on A and B and not such a good job on C.” I said, “OK, which of those are more important and which are less?” They admitted that they never really asked their members what they found more important. These are all examples of questions people should be asking, even before you start to think about how you’re going to do a survey.

YS: So what are some of the other different types of research and how are they used?

Mark Trencher: There’s a lot of other kinds of research -if a person wants to develop a new product, how big is the market? What are its demographics? Who exactly are your customers? Age? Income? If I’m opening up a new location, where should I go? How do people like to shop? In the store, online, through a catalog? There are web-based communications habits. How do people like to be reached?

There’s a lot of different areas of market research. Market research often means the business world, but not always. The research I do is in the Jewish community, and that’s communal research. Every survey I do, I get together a group of people from the community and say, “What do you want to know?” So, the process of coming up with questions is very interactive with people in the community. There’s a lot of studies out there of people-to people’s attitudes. There’s government research, the Bureau of Labor Statistics, if you need data, and business in your area. And of course, one area that people sometimes are aware of more than anything else, is all those political polls.

Basically, every research has three basic steps: what, who, and how. “What” is “what are you focusing on?” And ‘how” is “how are you going to get the answers you need?”

YS: In many elections, the numbers and the data that the main media sources are giving out there don’t always turn out to be correct. Can explain what political polling is and what happened over the last 5-10 years when the numbers are not always so accurate?

Mark Trencher: Basically, the political polling says a few important things. Number one, the gold standard of surveys, telephone surveys, is gone. People don’t answer their phone. People don’t have landlines. People screen their messages. How do you reach people? That’s a challenge.

Number two, in terms of political polling, bigger is worse, by which I mean because we have 12 swing states, if you’re inaccurate within plus or minus 2% in Arizona. Florida, Georgia, you can easily blow the entire election just from these three states. The nature of the electoral college makes it more difficult. The interesting lesson that I learned was back in 2016, when everyone talked about the “shy Trump voter.” A person who got a phone call and was asked will you vote for? Well, they wanted to vote for Donald Trump, but they didn’t want to say it because he wasn’t the typical candidate. And the theory was that people were shy, and they wouldn’t admit it. In my view, and we’ve now learned this is true, there’s really no such thing as a shy Trump voter, there’s a person who doesn’t want to be bothered.

There are people in this country, whether you’re talking about soap, deodorants, technology, or who you’re gonna vote for, they don’t want to be bothered, they don’t answer the phone. The challenges around representativeness are when you have your survey of 1,500 people, you can talk about plus or minus 3% accuracy all you want. But if those 1,500 are not representative of the group you’re surveying, that’s a problem.

YS: Perhaps you could share some secrets on how to present in a way that’s engaging to your market and that will actually get people to respond to a survey.

Mark Trencher: Why would people respond to a survey? There are two reasons. Number one, if it’s something that interests them. Two, it doesn’t look too hard to do. So, we try to make our surveys easy. We put them online. I know that in the case of COVID and the vaccines, everyone was interested in it. In the case of a survey we did, where we actually surveyed the entire spectrum of the Orthodox Jewish community, the challenge was really reaching the Hasidic groups, because they are harder to reach. They don’t have email or web access, the way that the Modern Orthodox have. One of the things that made that survey successful was the name of Hatzalah, an organization

that has a Net Promoter Score higher than I’ve ever seen any company in any survey. I will note though, that among some of the Hasidic groups, we had many more men than women respond. And that’s understandable, because these people may not have internet access at home, so they might have responded at the workplace. Sometimes you do a survey, and you get the non-representative response. But if you understand why, there are mathematical ways to adjust to that.

YS: Anyone that orders a product from Amazon or, as you mentioned, goes to a doctor, gets these surveys. Are surveys like that considered market research? Are they accurate?

Mark Trencher: Well, they might be if they’re run by a business. If a business is doing an asking for your opinion, my hope is that they would read the responses. I always get very disappointed when there’s no opportunity to type in why I am saying this. They just asked for the rating and that’s the end of the survey. My concerns are the quality of the data. We all know that some of the ratings on Amazon are biased. That’s why an organization like

Fakespot emerged, which tells you not what the rating is, but they look at the ratings and say, “We think that 10% of the ratings are not fake.” Sometimes the surveys are poorly designed, but they still can be market research. But in general, one of the problems in the research world is that there’s a lot of stuff out there that isn’t really research, that pretends to be research. You’ll get a phone call saying, “We’re doing a survey,” but no, they’re not doing a survey. It’s a recruitment call or a marketing call. So, to me, ultimately, that kind of gives research a bad name.

YS: Let’s talk about how the world of research applies to businesses- whether it’s a B2C, B2B, or even a person that has an idea and just wants to know if there is a market for their idea.

Mark Trencher: I recently got a phone call from a gentleman who said he had a concept for an educational product involving technology. It was very different from what’s out there currently, in the early stage, and he wanted to develop a business plan. The first thing he wanted to develop was an understanding of how big the market was. In the area of market size, there’s often a lot of data available. So, for this product, we looked at families with children, all these numbers are available from the Census Bureau, the distribution of children in preschool, how many are in kindergarten, grades 1-8 and high school, because the product would be a little bit different depending on the ages. So, a lot of it was just looking into what we call secondary research.

Research is divided into primary, which is a survey you do for new data no one else has, and secondary, which is drawing on what’s already out there. All this data was available for him, and I think he ended up being pleased at the size of the market. So, at that point, it becomes a go or no-go decision. The next step would be qualitative research. It could be interviews, group interviews. I’ve done studies with where I’ve had 2-10 minute telephone interviews that we recorded and analyzed. The next step would be product reactions. This is business to consumer, B2C. It gives him information that covers the entire spectrum of what he would need for a full-fledge business plan. So, this is just an example of a person who seems to be very in tune with research.

YS: By default, one would think that it’s much more important for a B2C business to do research, but is it fair to say that B2B also should be looking at research from their customer?

Mark Trencher: Absolutely. Many years ago, I worked for a large financial company that was selling retirement products, and we did a major project that was both B2B and B2C. For B2C, I seem to recall about 500 interviews with individuals. “Are you saving for your retirement?” “Where?” “How do you decide where to put the money?” “How do you decide how much to invest?” The B2B was completely different. We did a couple of dozen interviews asking, “Are you offering this to your employees?” Here are some new investment options that we’ve developed, is this something you’d be interested in offering to your employees?

Clearly, B2B and B2C are both important. I think there probably is more consumer research done than business research these days. But that might be because a lot of the consumer research gets publicized and made publicly available. Whereas a B2B project, you might never hear of it because it’s very often proprietary. But both are very important.

YS: Perhaps you could share a final tip to small businesses that are considering or aren’t convinced yet of the importance of research.

Mark Trencher: If you’re thinking about research, get your team together and say, “You know what? I’m thinking about research, but really, we’re here today for something else. I want to ask you to think of the questions that are on your mind that would be worth asking.” You will whet people’s appetites. You’ll get a process going. People will say, “Gee, I’d really love to know that.” So that’s really a good way to get to get the research process going. Finally, research is fun. You will learn things you didn’t know. You’ll think about how to use them, you’ll get some creative juices going. I think you’re gonna have a lot of fun doing research.