An Interview with Sim Shain: The Importance of Saying “Yes” and “No” 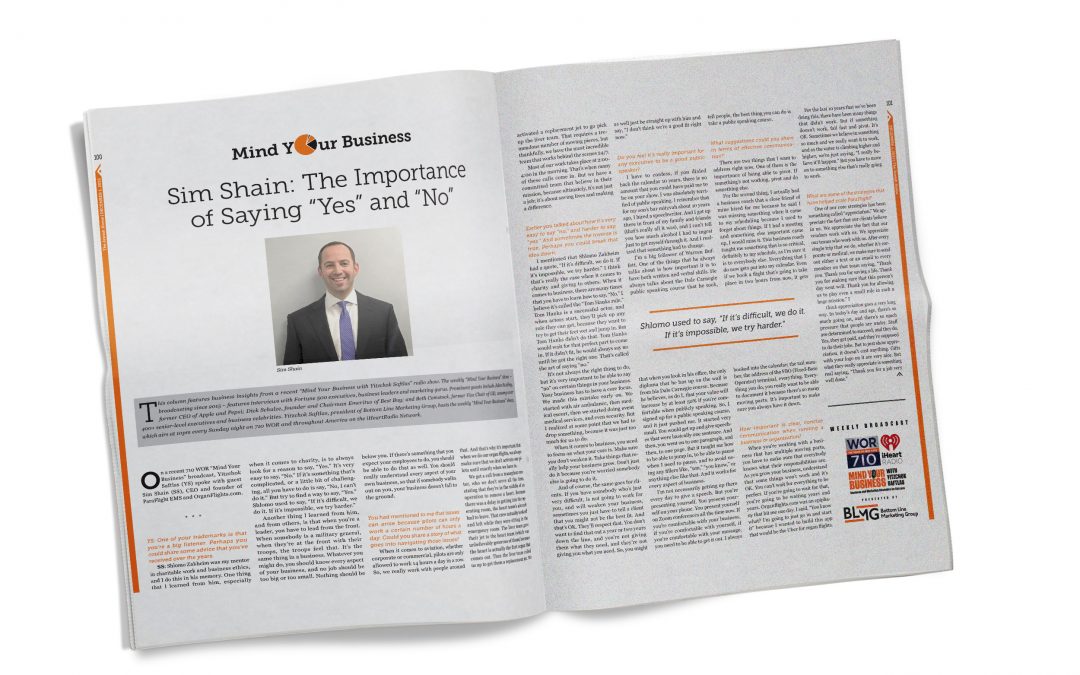 YS: One of your trademarks is that you’re a big listener. Perhaps you could share some advice that you’ve received over the years.

Sim Shain: Shlomo Zakheim was my mentor in charitable work and business ethics, and I do this in his memory. One thing that I learned from him, especially when it comes to charity, is to always look for a reason to say, “Yes.” It’s very easy to say, “No.” If it’s something that’s complicated, or a little bit of challenging, all you have to do is say, “No, I can’t do it.”  But try to find a way to say, “Yes.” Shlomo used to say, “If it’s difficult, we do it. If it’s impossible, we try harder.”

Another thing I learned from him, and from others, is that when you’re a leader, you have to lead from the front. When somebody is a military general, when they’re at the front with their troops, the troops feel that. It’s the same thing in a business. Whatever you might do, you should know every aspect of your business, and no job should be too big or too small. Nothing should be below you. If there’s something that you expect your employees to do, you should be able to do that as well. You should really understand every aspect of your own business, so that if somebody walks out on you, your business doesn’t fall to the ground.

YS: You had mentioned to me that issues can arise because pilots can only work a certain number of hours a day. Could you share a story of what goes into navigating those issues?

Sim Shain: When it comes to aviation, whether corporate or commercial, pilots are only allowed to work 14 hours a day in a row. So, we really work with people around that. And that’s why it’s important that when we do our organ flights, we always make sure that we don’t activate our pilots until exactly when we have to.

We got a call from a transplant center, who we don’t serve all the time, stating that they’re in the middle of an operation to remove a heart. Because there was a delay in getting into the operating room, the heart team’s aircraft had to leave. That crew actually took off and left while they were sitting in the emergency room. The liver team gave their jet to the heart team (which was unbelievably generous of them) because the heart is actually the first organ that comes out. Then the liver team called us up to get them a replacement jet.  We activated a replacement jet to go pick up the liver team. That requires a tremendous number of moving pieces, but thankfully, we have the most incredible team that works behind the scenes 24/7. Most of our work takes place at 2:00- 4:00 in the morning. That’s when many of these calls come in. But we have a committed team that believe in their mission, because ultimately, it’s not just a job; it’s about saving lives and making a difference.

YS: Earlier you talked about how it’s very easy to say “no,” and harder to say, “yes.” And sometimes the inverse is true. Perhaps you could break that idea down.

Sim Shain: I mentioned that Shlomo Zakheim had a quote, “If it’s difficult, we do it. If it’s impossible, we try harder.” I think that’s really the case when it comes to charity and giving to others. When it comes to business, there are many times that you have to learn how to say, “No.” I believe it’s called the “Tom Hanks rule.” Tom Hanks is a successful actor, and when actors start, they’ll pick up any role they can get, because they want to try to get their feet wet and jump in. But Tom Hanks didn’t do that. Tom Hanks would wait for that perfect part to come in. If it didn’t fit, he would always say no until he got the right one. That’s called the art of saying “no.”

It’s not always the right thing to do, but it’s very important to be able to say “no” on certain things in your business. Your business has to have a core focus. We made this mistake early on. We started with air ambulance, then medical escort, then we started doing event medical services, and even security. But I realized at some point that we had to drop something, because it was just too much for us to do. When it comes to business, you need to focus on what your core is. Make sure you don’t weaken it. Take things that really help your business grow. Don’t just do it because you’re worried somebody else is going to do it.

And of course, the same goes for clients. If you have somebody who’s just very difficult,  is not going to work for you, and will weaken your business, sometimes you just have to tell a client that you might not be the best fit. And that’s OK. They’ll respect that. You don’t want to find that our a year or two years down the line, and you’re not giving them what they need, and they’re not giving you what you need. So, you might as well just be straight up with him and say, “I don’t think we’re a good fit right now.”

YS: Do you feel it’s really important for any executive to be a good public speaker?

Sim Shain: I have to confess, if you dialed back the calendar 10 years, there is no amount that you could have paid me to be on your show. I was absolutely terrified of public speaking. I remember that for my son’s bar mitzvah about 10 years ago, I hired a speechwriter. And I got up there in front of my family and friends (that’s really all it was), and I can’t tell you how much alcohol I had to ingest just to get myself through it. And I realized that something had to change.

I’m a big follower of Warren Buffett. One of the things that he always talks about is how important it is to have both written and verbal skills. He always talks about the Dale Carnegie public speaking course that he took, that when you look in his office, the only diploma that he has up on the wall is from his Dale Carnegie course. Because he believes, as do I, that your value will increase by at least 50% if you’re comfortable when publicly speaking. So, I signed up for a public speaking course, and it just pushed me. It started very small. You would get up and give speeches that were basically one sentence. And then, you went on to one paragraph, and then, to one page. But it taught me how to be able to jump in, to be able to pause when I need to pause, and to avoid using any fillers like, “um,” “you know,” or anything else like that. And it works for every aspect of business.

Sim Shain: There are two things that I want to address right now. One of them is the importance of being able to pivot. If something’s not working, pivot and do something else. For the second thing, I actually had a business coach that a close friend of mine hired for me because he said I was missing something when it came to my scheduling because I used to forget about things. If I had a meeting and something else important came up, I would miss it. This business coach taught me something that is so critical, definitely to my schedule, as I’m sure it is to everybody else. Everything that I d now gets put into my calendar. Even if we book a flight that’s going to take place in two hours from now, it gets booked into the calendar; the tail number, the address of the FBO (Fixed-Base Operator) terminal, everything. Everything you do, you really want to be able to document it because there’s so many moving parts. It’s important to make sure you always have it down.

YS: How important is clear, concise communication when running a business or organization?

Sim Shain: When you’re working with a business that has multiple moving parts, you have to make sure that everybody knows what their responsibilities are. As you grow your business, understand that some things won’t work and it’s OK. You can’t wait for everything to be perfect. If you’re going to wait for that, you’re going to be waiting years and years. Organflights.com was an epiphany that hit me one day. I said, “You know what? I’m going to just go in and start it” because I wanted to build this app that would be the Uber for organ flights.

For the last 10 years that we’ve been doing this, there have been many things that didn’t work. But if something doesn’t work, fail fast and pivot. It’s OK. Sometimes we believe in something so much and we really want it to work, and as the water is climbing higher and higher, we’re just saying, “I really believe it’ll happen.” But you have to move on to something else that’s really going to work.

YS: What are some of the strategies that have helped scale ParaFlight?

Sim Shain: One of our core strategies has been something called “appreciation.” We appreciate the fact that our clients believe in us. We appreciate the fact that our vendors work with us. We appreciate our teams who work with us. After every single trip that we do, whether it’s corporate or medical, we make sure to send out either a text or an email to every member on that team saying, “Thank you. Thank you for saving a life. Thank you for making sure that this person’s day went well. Thank you for allowing us to play even a small role in such a huge mission.” I think appreciation goes a very long way. In today’s day and age, there’s so much going on, and there’s so much pressure that people are under. Staff are determined to succeed, and they do. Yes, they get paid, and they’re supposed to do their jobs. But to just show appreciation, it doesn’t cost anything. Gifts with your logo on it are very nice. But wat they really appreciate is something real saying, “Thank you for a job very well done.”