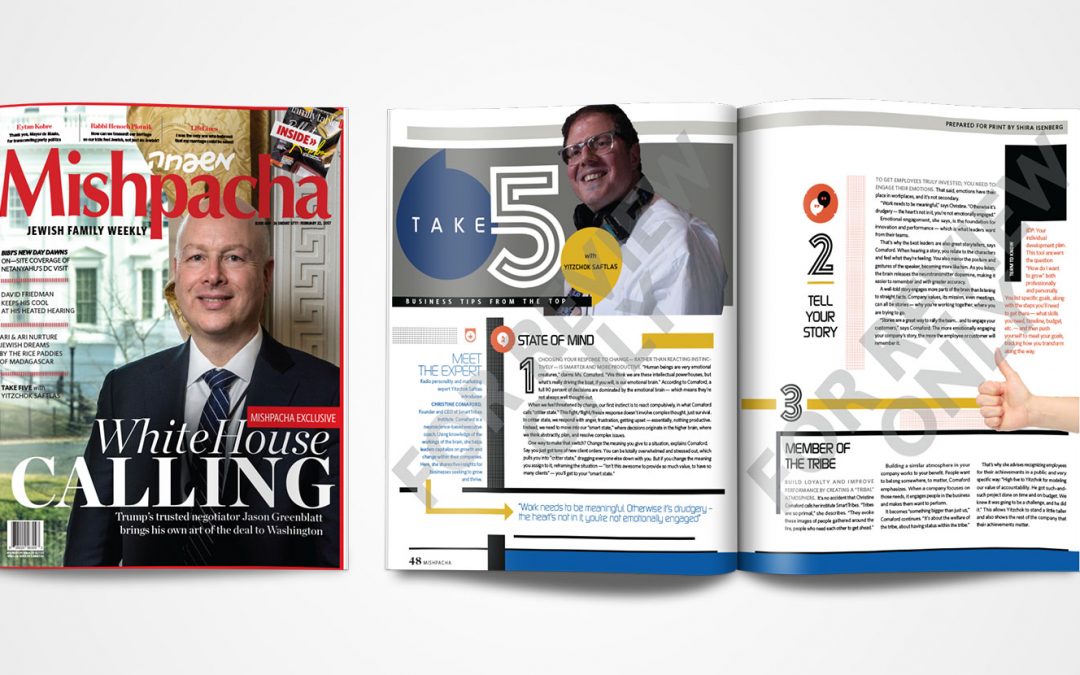 Choosing your response to change  — Rather than reacting instinctvely — is smarter and more productive. “Human beings are very emotional creatures,” claims Ms. Comaford. “We think we are these intellectual powerhouses, but what’s really driving the boat, if you will, is our emotional brain.” According to Comaford, a full 90 percent of decisions are dominated by the emotional brain — which means they’re not always well thought-out.

When we feel threatened by change, our first instinct is to react compulsively, in what Comaford calls “critter state.” This fight/flight/freeze response doesn’t involve complex thought, just survival. In critter state, we respond with anger, frustration, getting upset — essentially, nothing productive. Instead, we need to move into our “smart state,” where decisions originate in the higher brain, where we think abstractly, plan, and resolve complex issues.

One way to make that switch? Change the meaning you give to a situation, explains Comaford. Say you just got tons of new client orders. You can be totally overwhelmed and stressed out, which pulls you into “critter state,” dragging everyone else down with you. But if you change the meaning you assign to it, reframing the situation — “Isn’t this awesome to provide so much value, to have so many clients” — you’ll get to your “smart state.”

To get employees truly invested, you need to engage their emotions. That said, emotions have their place in workplaces, and it’s not secondary.

“Work needs to be meaningful,” says Christine. “Otherwise it’s drudgery — the heart’s not in it, you’re not emotionally engaged.”

Emotional engagement, she says, is the foundation for innovation and performance — which is what leaders want from their teams.

That’s why the best leaders are also great storytellers, says Comaford. When hearing a story, you relate to the characters and feel what they’re feeling. You also mirror the posture and gestures of the speaker, becoming more like him. As you listen, the brain releases the neurotransmitter dopamine, making it easier to remember and with greater accuracy.

A well-told story engages more parts of the brain than listening to straight facts. Company values, its mission, even meetings, can all be stories — why you’re working together, where you are trying to go.

“Stories are a great way to rally the team… and to engage your customers,” says Comaford. The more emotionally engaging your company’s story, the more the employee or customer will remember it.

Member of the Tribe

Build loyalty and improve performance by creating a “tribal” atmosphere. It’s no accident that Christine Comaford calls her institute SmartTribes. “Tribes are so primal,” she describes. “They evoke these images of people gathered around the fire, people who need each other to get ahead.

Building a similar atmosphere in your company works to your benefit. People want to belong somewhere, to matter, Comaford emphasizes. When a company focuses on those needs, it engages people in the business and makes them want to perform.

It becomes “something bigger than just us,” Comaford continues. “It’s about the welfare of the tribe, about having status within the tribe.”

That’s why she advises recognizing employees for their achievements in a public and very specific way: “High five to Yitzchok for modeling our value of accountability. He got such-and-such project done on time and on budget. We knew it was going to be a challenge, and he did it.” This allows Yitzchok to stand a little taller and also shows the rest of the company that their achievements matter.