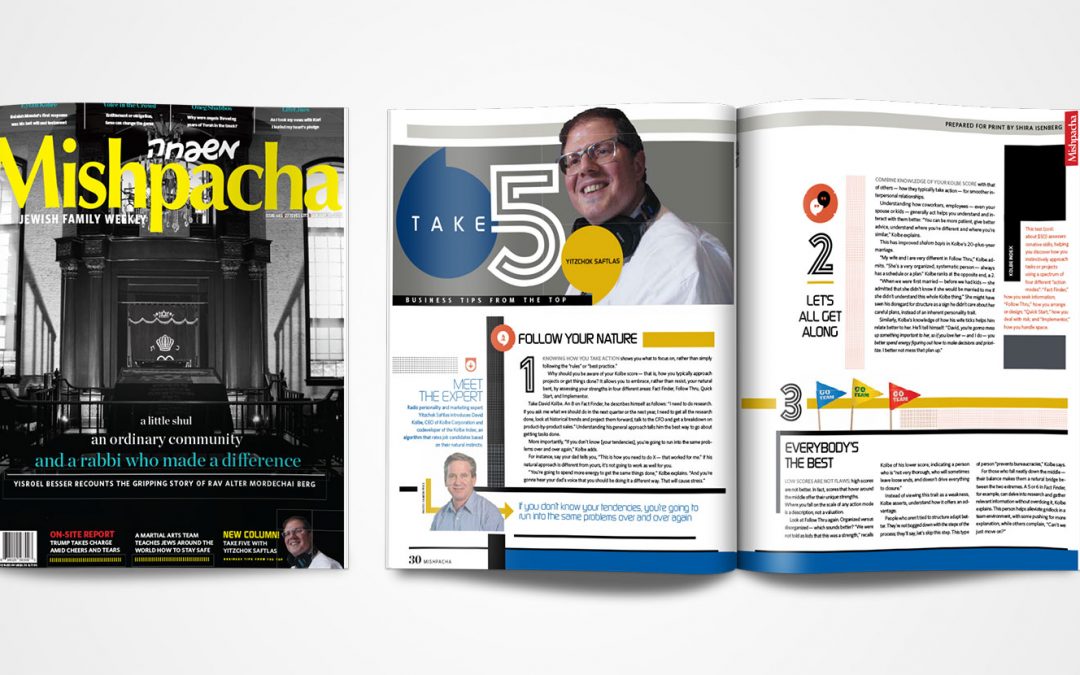 Knowing how to take action shows you what to focus on, rather than simply following the “rules” or “best practice.”

Why should you be aware of your Kolbe score — that is, how you typically approach projects or get things done? It allows you to embrace, rather than resist, your natural bent, by assessing your strengths in four diff erent areas: Fact Finder, Follow Thru, Quick Start, and Implementor.

Take David Kolbe. An 8 on Fact Finder, he describes himself as follows: “I need to do research. If you ask me what we should do in the next quarter or the next year, I need to get all the research done, look at historical trends and project them forward, talk to the CFO and get a breakdown on product-by-product sales.” Understanding his general approach tells him the best way to go about getting tasks done.

More importantly, “If you don’t know [your tendencies], you’re going to run into the same prob-lems over and over again,” Kolbe adds.

For instance, say your dad tells you, “This is how you need to do X — that worked for me.” If his natural approach is diff erent from yours, it’s not going to work as well for you.

“You’re going to spend more energy to get the same things done,” Kolbe explains. “And you’re gonna hear your dad’s voice that you should be doing it a diff erent way. That will cause stress.”

Combine knowledge of your Kolbe Score with that of others — how they typically take action — for smoother interpersonal relationships.

Understanding how coworkers, employees — even your spouse or kids — generally act helps you understand and interact with them better. “You can be more patient, give better advice, understand where you’re different and where you’re similar,” Kolbe explains.

This has improved shalom bayis in Kolbe’s 20-plus-year marriage.

“My wife and I are very different in Follow Thru,” Kolbe ad-mits. “She’s a very organized, systematic person — always has a schedule or a plan.” Kolbe ranks at the opposite end, a 2.

“When we were ﬁrst married — before we had kids — she admitted that she didn’t know if she would be married to me if she didn’t understand this whole Kolbe thing.” She might have seen his disregard for structure as a sign he didn’t care about her careful plans, instead of an inherent personality trait.

Similarly, Kolbe’s knowledge of how his wife ticks helps him relate better to her. He’ll tell himself: “David, you’re gonna mess up something important to her, so if you love her — and I do — you better spend energy ﬁguring out how to make decisions and prioritize. I better not mess that plan up.”

Low scores are not flaws; high scores are not better. In fact, scores that hover around the middle off er their unique strengths. Where you fall on the scale of any action mode is a description, not a valuation.

Look at Follow Thru again. Organized versus disorganized — which sounds better? “We were not told as kids that this was a strength,” recalls Kolbe of his lower score, indicating a person who is “not very thorough, who will sometimes leave loose ends, and doesn’t drive everything to closure.”

Instead of viewing this trait as a weakness, Kolbe asserts, understand how it offers an ad-vantage.
People who aren’t tied to structure adapt better. They’re not bogged down with the steps of the process; they’ll say, let’s skip this step. This type of person “prevents bureaucracies,” Kolbe says.

For those who fall neatly down the middle — their balance makes them a natural bridge be-tween the two extremes. A 5 or 6 in Fact Finder, for example, can delve into research and gather relevant information without overdoing it, Kolbe explains. This person helps alleviate gridlock in a team environment, with some pushing for more explanation, while others complain, “Can’t we just move on?”

Teams that complement each other with different strengths are more successful.

“The best teams typically have cognative diversity,” says Kolbe. “The people on that team can cover all the bases and operate in a more dynamic way… rather than ﬁghting about the process, they can focus on the results.”

It’s best when the leader understands both his own strengths and how to build a team that eliminates weak spots or gaps.
That doesn’t mean all team members should be very different, especially on a small team. “We’ve seen instances where executives think they want [an assistant] who is kind of the polar opposite, and that doesn’t tend to work,” Kolbe says. “They’re so different, yet they’re working so closely together, which can create a lot of friction.”

When people ﬁnd themselves working closely with others who operate very differently, Kolbe scores point out everyone’s unique strengths so they can appreciate them and ﬁnd ways to deal with them. For instance, if the secretary needs to ask multiple questions to the big-picture boss who doesn’t have time, the boss can suggest that the secretary write down the questions and later turn to someone on the team for answers.

Certain fields correlate with specific Kolbe profiles, but that doesn’t determine the course of your career.

What does the Kolbe Index look like for a great sales-person? Generally someone high on the Quick Start scale could sell you the Brooklyn Bridge. “The stereotypical salesperson needs to close deals, take risk, and work with all different kinds of clients,” says Kolbe. “He’ll accommodate the need for detail and information without getting bogged down with all the details.”

Politicians are often part of this group. For example, Kolbe believes Donald Trump would probably come out high on the Quick Start scale. “He shoots big, sometimes missing the target, but he’s not averse to taking risk. He could be a 10 — they take chances, they speak extemporaneously. The other end of the spectrum is someone who sticks with what works, what’s tried and true. That’s not his MO.”

Yet people — and career paths — are diverse. There may be an ideal Kolbe proﬁle for a lawyer, but there are so many types of lawyer jobs. “We focus on helping people understand,” Kolbe explains, “given your strengths, given the way you take action, this is what you need to do to be a successful lawyer. If you need to do things differently, shake things up, take risks from time to time, you need to get a legal job that allows you to do that. [If you take] a button down, straitlaced corporate kind of job where everything has to be done the same way time after time — guess what? You’re gonna leave.”
It is equally important to understand that your ﬁrst job — or even your ﬁfth one — is not going to only include duties and responsibilities that ﬁt you to a T. You’ll need to adapt to those challenging areas by, for example, delegating.