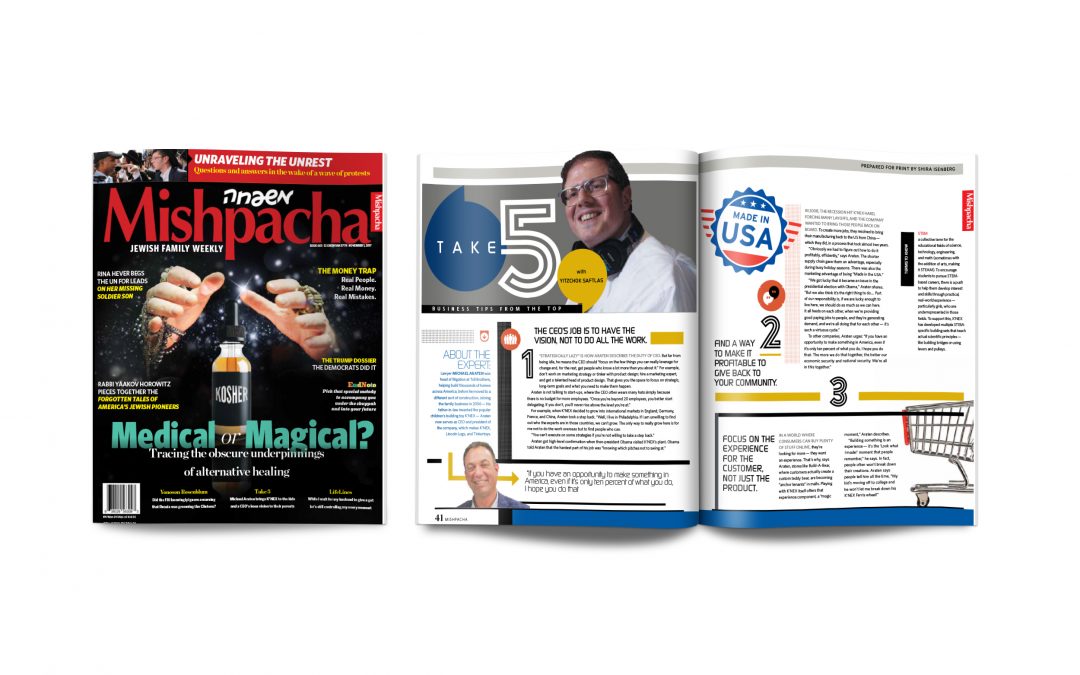 The CEO’s Job is to Have the Vision, Not to Do All the Work

“STRATEGICALLY LAZY” IS HOW ARATEN DESCRIBES THE DUTY OF CEO. But far from being idle, he means the CEO should “focus on the few things you can really leverage for change and, for the rest, get people who know a lot more than you about it.” For example, don’t work on marketing strategy or tinker with product design; hire a marketing expert, and get a talented head of product design. That gives you the space to focus on strategic, long-term goals and what you need to make them happen.

Araten is not talking to start-ups, where the CEO often wears many hats simply because there is no budget for more employees. “Once you’re beyond 20 employees, you better start delegating. If you don’t, you’ll never rise above the level you’re at.”

For example, when K’NEX decided to grow into international markets in England, Germany, France, and China, Araten took a step back. “Well, I live in Philadelphia. If I am unwilling to find out who the experts are in those countries, we can’t grow. The only way to really grow here is for me not to do the work overseas but to find people who can.

“You can’t execute on some strategies if you’re not willing to take a step back.”

Araten got high-level confirmation when then-president Obama visited K’NEX’s plant. Obama told Araten that the hardest part of his job was “knowing which pitches not to swing at.”

IN 2008, THE RECESSION HIT K’NEX HARD, FORCING MANY LAYOFFS, AND THE COMPANY WANTED TO BRING THOSE PEOPLE BACK ON BOARD. To create more jobs, they resolved to bring their manufacturing back to the US from China — which they did, in a process that took almost two years.

“Obviously we had to figure out how to do it profitably, efficiently,” says Araten. The shorter supply chain gave them an advantage, especially during busy holiday seasons. There was also the marketing advantage of being “Made in the USA.”
“We got lucky that it became an issue in the presidential election with Obama,” Araten shares.

“But we also think it’s the right thing to do.… Part of our responsibility is, if we are lucky enough to live here, we should do as much as we can here.

It all feeds on each other, when we’re providing good paying jobs to people, and they’re generating demand, and we’re all doing that for each other — it’s such a virtuous cycle.”

To other companies, Araten urges: “If you have an opportunity to make something in America, even if it’s only ten percent of what you do, I hope you do that. The more we do that together, the better our economic security and national security. We’re all in this together.”

Focus on the Experience for the Customer, Not Just the Product

IN A WORLD WHERE CONSUMERS CAN BUY PLENTY OF STUFF ONLINE, they’re looking for more — they want an experience. That’s why, says Araten, stores like Build-A-Bear, where customers actually create a custom teddy bear, are becoming “anchor tenants” in malls. Playing with K’NEX itself offers that experience component, a “magic moment,” Araten describes.

“Building something is an experience — it’s the ‘Look what I made!’ moment that people remember,” he says. In fact, people often won’t break down their creations. Araten says people tell him all the time, “My kid’s moving off to college and he won’t let me break down his K’NEX Ferris wheel!”

Be Open to Ideas from Anywhere and Anyone

“PEOPLE WHO THINK THEY KNOW EVERYTHING TEND TO FALL BEHIND,” says Araten. “One of my famous quotes from Bob Toll when I was at the Toll Brothers was, ‘The wise man knows what he does not know.’ ”

To keep its creative edge — and its customers’ interest — K’NEX makes a point to have its ear to the ground, because ideas can come from anywhere. They have teams that interact with customers on social media and listen to what they say, read real product reviews, and watch the videos people post of their creations. But the idea to take the virtual vehicles from Nintendo’s Mario Kart game and create them in real versions with K’NEX? That came from inside the family.

“The Nintendo idea — I gotta give credit to my son. He had gotten a DS [a handheld game console made by Nintendo] back in 2011. He said, ‘Dad, why don’t you just build this stuff? Because you can easily do it.’ ” The R&D team at K’NEX loved the idea, although it took longer to convince Nintendo. “They said no eight times. Finally, on the ninth time, they said yes.”

WHERE’S THE LINE BETWEEN PUSHING YOUR TEAM TO SUCCEED AND SETTING UNREALISTIC EXPECTATIONS?
“This is always a balance for CEOs,” Araten admits. “You want to set expectations so they don’t seem impossible but so that they are a stretch.”

When K’NEX moved all its manufacturing to the US, it took about 20 weeks to get a product to market. “I said, ‘Let’s make it ten weeks,’ ” recalls Araten. “Our guy said we could never do that. ‘The best we could do is cut two weeks off.’ ”

Well, Araten pushed and pushed for shorter times to get to market, and the company eventually got to 12 weeks.
“If you set a high bar, you tend to get what you expect — within reason.” You can’t, for example, tell your team to produce ten times what they did last year. “But if you tell them to do 1.4 times, and they thought they could only do 1.1, you’ll probably end up with 1.3.”

How do employees react to this type of motivation? The people who like that type of environment will stay, Araten reports, while those who don’t, will self-select out. “So you improve the overall quality of the people that you have.”