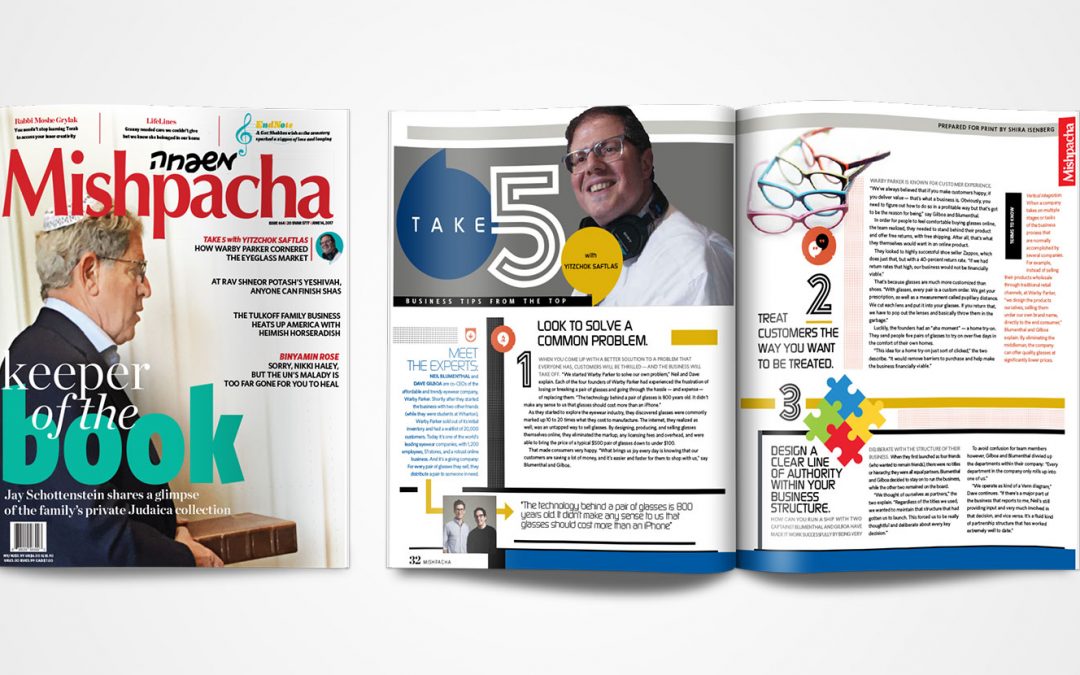 Look to Solve a Common Problem

WHEN YOU COME UP WITH A BETTER SOLUTION TO A PROBLEM THAT EVERYONE HAS, CUSTOMERS WILL BE THRILLED — AND THE BUSINESS WILL TAKE OFF. “We started Warby Parker to solve our own problem,” Neil and Dave explain. Each of the four founders of Warby Parker had experienced the frustration of losing or breaking a pair of glasses and going through the hassle — and expense — of replacing them. “The technology behind a pair of glasses is 800 years old. It didn’t make any sense to us that glasses should cost more than an iPhone.”

As they started to explore the eyewear industry, they discovered glasses were commonly marked up 10 to 20 times what they cost to manufacture. The internet, they realized as well, was an untapped way to sell glasses. By designing, producing, and selling glasses themselves online, they eliminated the markup, any licensing fees and overhead, and were able to bring the price of a typical $500 pair of glasses down to under $100.
That made consumers very happy. “What brings us joy every day is knowing that our customers are saving a lot of money, and it’s easier and faster for them to shop with us,” say Blumenthal and Gilboa.

Treat Customers the Way that You Want to be Treated

WARBY PARKER IS KNOWN FOR CUSTOMER EXPERIENCE. “We’ve always believed that if you make customers happy, if you deliver value — that’s what a business is. Obviously, you need to figure out how to do so in a profitable way but that’s got to be the reason for being,” say Gilboa and Blumenthal.

In order for people to feel comfortable buying glasses online, the team realized, they needed to stand behind their product and offer free returns, with free shipping. After all, that’s what they themselves would want in an online product.
They looked to highly successful shoe seller Zappos, which does just that, but with a 40-percent return rate. “If we had return rates that high, our business would not be financially viable.”

That’s because glasses are much more customized than shoes. “With glasses, every pair is a custom order. We get your prescription, as well as a measurement called pupillary distance. We cut each lens and put it into your glasses. If you return that, we have to pop out the lenses and basically throw them in the garbage.”

Luckily, the founders had an “aha moment” — a home try-on. They send people five pairs of glasses to try on over five days in the comfort of their own homes.

“This idea for a home try-on just sort of clicked,” the two describe. “It would remove barriers to purchase and help make the business financially viable.”

Design a Clear Line of Authority Within Your Business Structure

HOW CAN YOU RUN A SHIP WITH TWO CAPTAINS? BLUMENTHAL AND GILBOA HAVE MADE IT WORK SUCCESSFULLY BY BEING VERY DELIBERATE WITH THE STRUCTURE OF THEIR BUSINESS. When they first launched as four friends (who wanted to remain friends), there were no titles or hierarchy; they were all equal partners. Blumenthal and Gilboa decided to stay on to run the business, while the other two remained on the board.

“We thought of ourselves as partners,” the two explain. “Regardless of the titles we used, we wanted to maintain that structure that had gotten us to launch. This forced us to be really thoughtful and deliberate about every key decision.”

To avoid confusion for team members however, Gilboa and Blumenthal divvied up the departments within their company: “Every department in the company only rolls up into one of us.”
“We operate as kind of a Venn diagram,” Dave continues. “If there’s a major part of the business that reports to me, Neil’s still providing input and very much involved in that decision, and vice versa. It’s a fluid kind of partnership structure that has worked extremely well to date.”

Pay Attention to What Your Customers are Saying

WHAT MAKES A HIGHLY SUCCESSFUL E-COMMERCE BUSINESS LIKE WARBY PARKER BRANCH OUT TO BRICK-AND-MORTAR STORES? That’s what customers wanted, say Blumenthal and Gilboa. From the very beginning, people wanted a place to try on frames. “We started getting calls from strangers around Philly where we were based at the time, asking if they could try on the frames at our store or office. I said, ‘Well, the store is my apartment, but come on over.’ ” They laid the glasses out on the dining room table and the customers would come, enjoying both the experience of trying on the entire collection and meeting the people behind the brand.

“We learned so much from the customer face-to-face interaction, gaining feedback around the product and what customers
were looking for that we weren’t able to get from purely digital experiences,” the two explain.

Later, they created a showroom in their New York City office that would get a couple hundred customers a day. They even converted an old school bus to a mobile optical store and drove around the country setting up pop-up shops.

“Anytime we had a physical environment for customers to engage with, they loved the experience,” Gilboa and Blumenthal assert. “It drove a lot of sales, and we had a lot of learning for our business. That gave us the confidence to open our first proper store.”

Inject Fun Into Your Corporate Environment

DON’T BE AFRAID TO HAVE FUN AT WORK. A LITTLE LEVITY MAKES THE OFFICE A PLACE WHERE EMPLOYEES WANT TO BE. THEY’RE PRODUCTIVE AND HAPPY, WITH A HIGH MORALE — LIKE THOSE AT WARBY PARKER.

“Warby Parker as a brand stands for fun, creativity, and doing good in the world,” say Blumenthal and Gilboa. The folks who come to work at Warby Parker subscribe to that notion. One of our core values is to inject fun and quirkiness into everything we do.”

For example, when a new employee starts out, he’s greeted with a bright blue balloon decorated with a cartoon steak that says “Nice to meat you!” Similarly, from their very first product line, Warby Parker has been selling monocles — a whimsical product that helps set the brand apart.

To get new employees up to speed on how Warby Parker operates, they spend a week “onboarding,” that is, integrating them into the company culture.

“We believe if people understand our vision, where we’re going, our North Star… then they should always be able to make an informed, good decision as an employee here.”